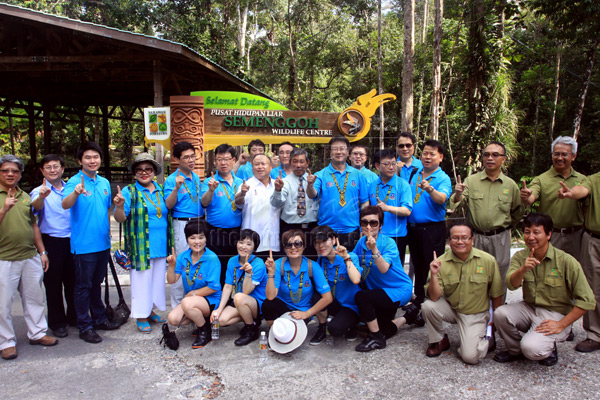 FRIENDSHIP: Chan (second row, centre) and Ali (on Chan’s left) with Hang (second row, fifth right) and his entourage as well as SFC staff at the Semenggoh Wildlife Centre. 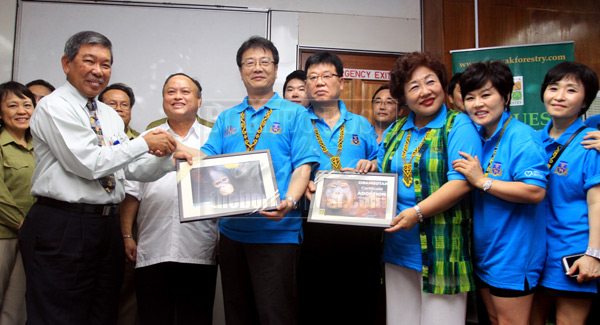 Digital Guro is orangutan Analisa’s second offspring, and was first sighted on Aug 16 last year. Her first was Anakku born in 2006.

“We had toured the nature reserve (Semenggoh Wildlife Centre) earlier on and were amazed by the local people’s love for nature,” he said with much praise.

“We look forward to visiting more places and hope there will be more mutual exchanges between the two cities in all aspects including social, cultural and economy in the near future,” Hang added.

“Also, come back more often to visit your orangutan pet, Digital Guro. Keep track of its progress from time to time,” he said.

Chan praised Sarawak Forestry Corporation (SFC) for its efforts in maintaining the nature reserve which has become the centre of attraction for locals and tourists.

Congratulating Guro City for their commitment and support, Chan said: “We (the two cities) have moved on to a new chapter through nature.”

“If foreigners from so far away can be so generous and make efforts to show that they care, we should be able to do better since this is in our own backyard,” he reminded.

“Conservation work will never be enough when it comes to orangutan as it needs a lot of time and money and therefore we are very grateful to the Guro City Council for their generous contribution,” he said.

According to him, it is estimated that there are only 2,000 to 2,500 wild orangutans left in Sarawak today.

On the cost for the general care of an orangutan, Ali said it is around RM18,000 a year.

“Therefore, in our pursuit to further enhance our orangutan conservation efforts, we launched the Orangutan Adoption Programme in 2009,” he explained.

The 653-hectare Semenggoh nature reserve is home to a total of 27 orangutans and out of the number, 12 of them are male.

The oldest orangutan is old granny Seduku, who is now 42 years old.

The latest addition to the orangutan family is baby girl Ruby who was born to Saddamiah (second offspring of Seduku) and first spotted on June 23.

To date, 20 orangutans have been born in Semenggoh Wildlife Centre where they freely roam
in the nature reserve.