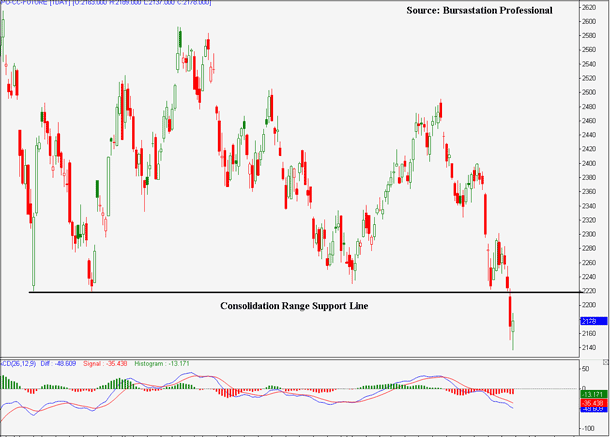 Crude Palm Oil Futures (FCPO) on Bursa Malaysia Derivatives fell below the psychological level of 2,200 which also broke the consolidation range since October 2012.

However, it managed to end higher on Friday as traders bargain hunt after prices dropped to a near four year low.

Palm oil prices dropped to its lowest since October 2009 as worries of ideal weather in the US Midwest could lead to a record soybean harvest which may boost soyoil supplies while shifting demand away from the competing tropical oil.

Meanwhile, cargo surveyor Societe Generale de Surveillance (SGS) reported that exports of Malaysian palm oil products for July 1 to 20 fell 13.8 per cent to 794,081 tonnes from 916,768 tonnes shipped during June 1 to 20.

Palm oil posted a 3.5 per cent drop this week which was its fourth weekly loss as it was also pressured by fall in demand side.

Exports may improve in the coming week although it may not improve the monthly supply and demand data next month especially when production cycles started to increase in the second half of the year.

The currency went up to as high as 3.2110 against the Malaysian ringgit. A higher greenback against the ringgit normally makes the palm cheaper for overseas buyers and refiners.

Meanwhile, Indonesia rupiah (US$1= 10,260 rupiah) had been weakened by the strength in dollar where this could prompt foreign buyers to shift their demand to Indonesia as weaker rupiah makes their palm cheaper for purchase.

The benchmark FCPO October contract settled RM2,183 per tonne on Friday which was down 74 points from last Friday at RM2,257.

From the chart, price continued to fall below again and this time it broke below the consolidation range support line.

As we can see from the chart, price dived once it broke below the support line because fcpo price finally break the consolidation range and revisit the low nearly four years ago.

Since price now breaks and closes below the consolidation range support line, price may fall further unless it is able to close above the support line in the coming weeks.

Malaysian export data for June 1 to 30 by ITS and SGS on July 31 (Wednesday).

Oriental Pacific Futures (OPF) is a Trading Participant and Clearing Participant of Bursa Malaysia Derivatives. You may reach us at www.opf.com.my Disclaimer: This article is written for general information only. The writers, publishers and OPF will not be held liable for any damage or trading losses that result from the use of this article.