Wednesday, July 15
You are at:Home»News»Sarawak»Greater road accessibility by 2020 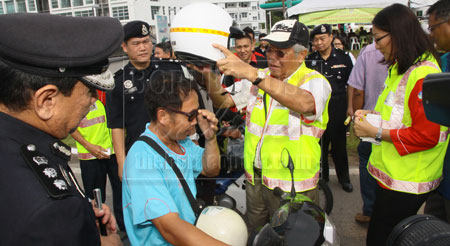 SAFETY FIRST: Manyin helps to put a SIRIM-certified helmet on a road user during the road safety campaign at Petronas in Samarahan Expressway yesterday.

Detailed data, including the costing, would be known by the end of this month — Manyin

KUCHING: Sarawak aims to increase its road accessibility from the current 77 per cent to at least about 90 per cent by 2020.

The remaining 23 per cent constitutes about 5,000 kilometres of roads, most of them in the rural areas such as Baram and Kapit.

Minister of Infrastructure Development and Communications Dato Sri Michael Manyin said it would cost about RM10 billion to build these 5,000 kilometres of roads.

He told reporters here yesterday that a two-day lab was conducted recently to identify longhouses, villages and resettlement areas that had yet to have roads.

The lab was attended by personnel from his ministry, the Public Works Department, Resident Offices, District Offices and the Department of Environment.

Detailed data, including the costing, would be known by the end of this month.

“They (government) wanted to make sure that by 2020 at least about 90 per cent of Sarawak will be accessible by road.

“Otherwise, despite we (Sarawak) being already 50 years old we still walk for miles. We will fight for it,” he said after launching the state-level road safety campaign ‘Ops Selamat’ organised by the Road Safety Department at Petronas in Samarahan Expressway.

On road accidents, he said about 65 per cent of accidents in the state occurred on straight roads and during fine weather. This runs contrary to the general perception that accidents happened only during bad weather.

He lamented most people tend to speed on straight roads during fine weather. On bad weather, they could be more cautious.

Citing statistics, he said on the average about 300 people die on the roads in the state annually.

“For the whole of Malaysia, about two people die on the road daily.”

Manyin agreed many road accidents happened because most roads in the state were not of highway standard.

“The federal government is very concern and committed to improve the Pan Borneo trunk road, all the way from Kuching to Miri.

“I have discussed with the Minister of Works in Kuala Lumpur, and our priority now is to upgrade road stretches from Miri to Bintulu, Bintulu to Sibu, and Serian to Sri Aman.

“We hope to build this in the next five years as mentioned in the Barisan Nasional manifesto.”

On road safety, Manyin advised motorcyclists to use only helmets that had been certified by the Standard and Industrial

He cautioned those who use half-cut or sub-standard helmets were putting their lives at stake, because it is like not wearing any helmets at all.

Manyin said this type of helmets were readily available because they were imported as toys and not as helmets.

“They were allowed to be sold because they were imported as toys, not helmets. As such, the authority cannot reject them although they did not meet the required specifications for helmets.”