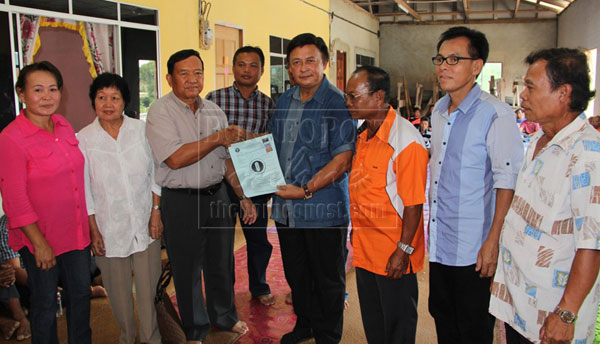 He told BAT3 yesterday the party’s Supreme Council would pick the candidates.

For now, the party has identified young and capable people to rejuvenate the party.

“Now is the time for us to consolidate. We have reached rock bottom. The only way for us now is moving forward,” he said when met after a meet-the-people session at Rumah Jilap Taji, some 8km from here, yesterday.

Mawan, who is also Social Development Minister, admitted he was more confident now to lead the party after winning all the four parliamentary seats – Mas Gading, Saratok, Bintulu and Baram – it contested in the May 5 general election.

The current term of the State Legislative Assembly expires on June 19, 2016, but the chief minister has the prerogative to dissolve the Assembly earlier.

In the 10th state election in 2011, SPDP contested in eight seats and won six. It lost Krian and Ba Kelalan to PKR.

But after the state election, the party suffered a huge blow when the party sacked five members, four of them assemblymen and one an MP, for gross insubordination. The MP, Datuk Dr Tiki Lafe, defended Mas Gading in the recent polls as an independent candidate, but lost.

The situation in SPDP worsened when its Meluan assemblyman Wong Judat quit and joined Sarawak Workers Party (SWP) as its vice president on Sept 1, 2012.

When asked whether the party would reconsider taking back the four assemblymen, who formed the yet-to-be-registered BN Club, Mawan said the party would consider all options to tackle the issue.

He added the party would soon have its triennial general meeting (TGM) and then hold inner circle meetings.

“On the new candidates, the Supreme Council will decide who would be the fielded. We will not be talking about the BN Club members. We will only talk about SPDP seats.”

Meanwhile, Mawan revealed that through better rapport with federal leaders, Saratok had received more than RM50 million in allocations in a short period of time.

“We are now in a better position to seek funding from federal leaders, including Prime Minister Datuk Seri Najib Tun Razak. This is possible because we are now in BN, and in BN we deliver and fulfil our promises.”

Asked how he divides his time between his ministry, his constituencies and family, Mawan said he was doing it through “smart time management”.

“From Mondays through Fridays, it would be either parliament or serving my ministry. On Saturdays, I will be visiting my kawasan of Pakan and Saratok, and on Sundays it’s my time to play golf and have a relaxing evening with my friends and family.”