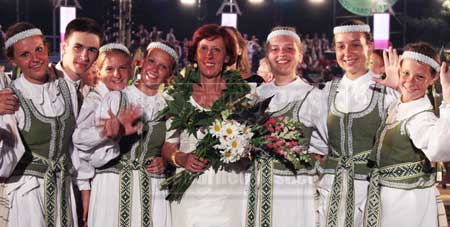 DAZZLING: Locals will have the chance to watch performances from Eastern Europe for the first time. Papartëlis fromLithuania will perform the unique folk dance of the country.

SIBU: The Sibu International Dance Festival to be held here from Aug 13 to 17 has attracted 14 dance groups from seven countries.

This colourful event is organised by Hornland Dance Theatre, in association with Sibu Municipal Council. It will be held at several locations here.

There are both outdoor and indoor performances.

The outdoor performances will be held at the Rejang Esplanade, where each dance group would be asked to choose a site and then perform at that site.

“Entrance is free and the audience will be able to watch the performances at a close distance.”

Indoor performances would be held for three nights, from August 15 to 17, at the Sibu Civic Centre.

It would be presented by 14 dance groups.

Tickets for the concerts are now available.

For more information, logon to www.facebook.com/SibuInternationalDanceFestival or call Hornland Dance Theatre at 084-349932.