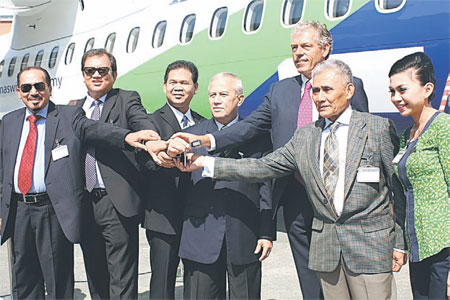 FLY ANYWHERE, ANYTIME: Nawawi (centre) holding the symbolic key he had received from Moore (third right) alogn with (from left) Rashid, Johniston, Ik Pahon and Zainal Abidin. The aircraft was named Rafflesia in honour of the largest flower in the world which is found in all countries within the BIMP-EAGA region. — Photo by Churchill Edward

According to MASwings chief executive officer Datuk Captain Mohd Nawawi Awang, the route to Puerta Princessa was supposed to begin in 2012 but the plan was delayed due to the Lahad Datu intrusion episode.

MASwings planned to start again the flight to the place latest by October this year, he added during the receipt of the group’s very first ATR 72-600 aircraft on Toulouse early Thusday.

MASwings business expansion journey does not end with Puerto Princessa.

With its above 90 per cent on time performance annually and carried 1.5 million passengers recorded last year, MASwings is confident with the new addition to its f leet, the targeted two million this year would be an achievable mission.

Founded in 1981, ATR has become the world leader on the market for regional aircraft with 90 seats or less.

Since its inception, ATR has sold over 1,300 aircraft.

ATR planes are represented in the fleets of 180 operators in 90 countries and have a total over 21 million flight hours.

Delighted with the success of having purchased the aircraft, Nawawi in a press conference christened her as Rafflesia in honour of the largest flower in the world which is found in all countries within the BIMPEAGA region.

The new ATR 72-600s of MASwings are equipped with a stylish and widest new cabin in the turboprop market, featuring thinner seats, new LED lightening and larger overhead bins by 10 per cent while, providing passengers with additional legroom.

ATR propeller planes are more cost effective for regional market particularly at routes that require less than two hour long flight each because they would only burn 700kg of fuel per hour compared to jet planes that burnt 207,000 kg of fuel per hour.

The aircraft has the most advanced glass cockpit in the regional aircraft market specifically developed for ATR by Thales which includes the latest navigation and communication aid tools.

Meanwhile, ATR head of Global Sales John Moore said the arrival of the ATRs underlines a new step of a partnership which has proven fruitful since both parties signed their first agreement late 2007.

Since then, MASwings has strongly succeeded in expanding regional aviation across Borneo and strengthening both human and business links.

“The ATR is a green aircraft as it burn significant much less fuel and therefore it produces less emission of carbon dioxide and gases compared to other aircraft in the market today,” Moore explained.