Thursday, August 6
You are at:Home»News»Sarawak»Diesel crisis: Supply may normalise by today 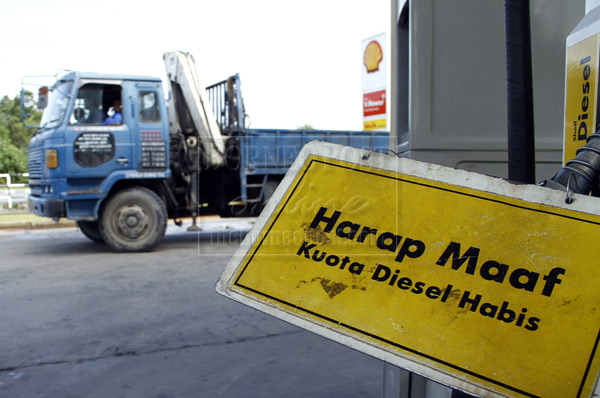 OUT OF STOCK: A sign displaying the unavailability of diesel at a Shell station in the city. — Photo by Chimon Upon

KUCHING: The shortage of diesel across the state is expected to be resolved by today.

Oil companies had assured that the delivery of additional supplies to all affected petrol stations would be completed by yesterday, said Wan Ahmad Uzir Wan Sulaiman, state director of the Ministry of Domestic Trade, Cooperative and Consumerism (MDTCC), when contacted yesterday.

He said only 25 petrol stations in the state had run out of diesel. The crisis has hit many other states as well.

“Following our meeting, the oil companies have given assurance that diesel stock will be delivered by today (Monday). The ministry has approved the distribution of additional quota after an apparent shortage.”

As at noon yesterday, a quick check around the city found only a handful of petrol stations were still hanging ‘No Diesel’ notices. However, many oil tankers were spotted in the city.

There were also long queues of diesel-powered vehicles at some petrol stations.

“I’m probably down to my last kilometre. It was difficult to look for diesel this past couple of days that I decided to save on the remaining fuel in the tank rather than driving further to continue my search,” said driver Sid Unggang, who was lining up to refuel his vehicle.

Cassandra, 28, when met at a petrol station in Jalan Tun Ahmad Zaidi Adruce, suggested the government increase the diesel quota to prevent frequent occurrence of shortage.

Agreeing that an increase in quota may result in supply manipulations and smuggling activities, the engineer called for stronger enforcement from the relevant authorities.

The government had approved an additional 20 million litres of subsidised diesel on Saturday to meet the shortage.

Domestic Trade, Cooperatives and Consumerism Minister Datuk Hasan Malek said the move to allocate 20 million litres until the end of July came after a Friday meeting with oil companies.

He said distribution to petrol stations had already begun, and that there would not be any problem of supply. He denied there was any shortage, as supply of diesel is sufficient.

Hasan added that enforcement officers would be on the lookout for oil tanker drivers selling fuel to third parties. Enforcement agents had also identified “hotspot stations” and currently keeping an eye on them.

Previous ArticleJunior Eldstal: From Japan with thanks
Next Article BN must win back Chinese voters — Naroden