Wednesday, June 3
You are at:Home»Sports»Football»Legendary Croc Jeff Curran is back in town 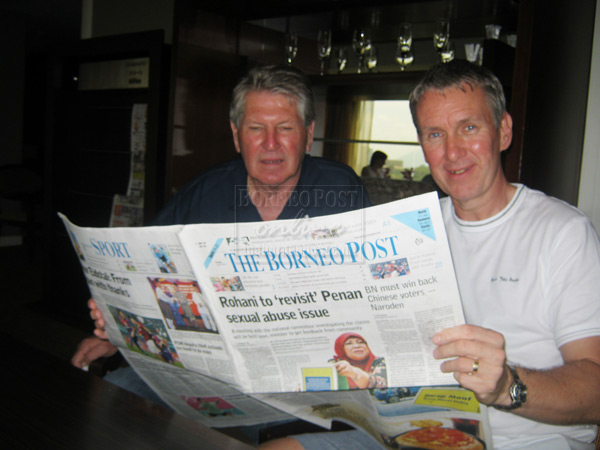 MAKING NEWS: Curran (right) and Vest having a light moment reading The Borneo Post while chatting with reporters yesterday.

The 52 year-old Scotsman is currently on holiday with his wife.

Speaking to The Borneo Post yesterday, Curran revealed that he has the fondest memories of his four years playing mainly as a sweeper for Sarawak from 1991 to 1994.

“I was sad when I left as living somewhere for four year was never a short time but I do understand the decision of the management during the time. After my last match I went straight back to Glasgow, Scotland for good,” he said.

He joined the Scottish Police Service upon his return to his hometown.

“After I was back in Scotland, it took me months to adjust to the life back there. Sarawak was always in my mind and my family missed the life living here too,” he added.

His son was born here in Normah Hospital in1993. Curran admits that his son have also longed to come here to the place of his birth.

Asked why he did not come back to visit Sarawak sooner, he explained that he had a young family to take care of back then and travelling from Scotland to Sarawak was also costly.

“Now that my children are young adults, I have more time for myself and my wife as well as to travel. I hope it won’t take another 19 years for me to come here again,” he smiled.

Among the highly-prized possessions in his house are his Sarawak winner’s medal, jerseys, photographs and other memorabilia that some die-hard Sarawak fans could only dream of owning.

Curran, a staunch Glasgow Celtic and Liverpool FC fan, also spoke of his role model who was also his one-time mentor Kenny Daglish.

He was in Celtic’s youth programme when Daglish was playing for Celtic and he still attends Celtic matches to this day.

Playing his first match with Sarawak in 1991, Curran was one of the trio of import players brought by legendary manager Alan Vest back then.

Together with the other two import players John Hunter and David Evans, they were part of the Sarawak team that won the state’s only FA Cup in 1992.