Thursday, June 4
You are at:Home»News»Sarawak»Naroden: Sufficient water by end of Sept 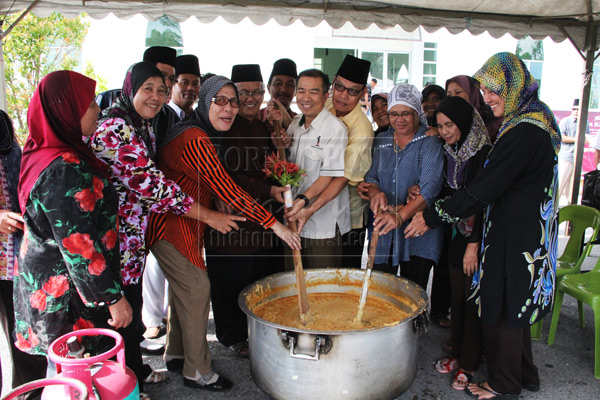 SPIRIT OF SHARING: Naroden (centre) stirring a big wok of Bubur Lambuk to symbolise the spirit of sharing in the fasting month of Ramadan at Simunjan Mosque yesterday.

INCREASED CAPACITY: The water reservoir in Simunjan has been deepened to increase its capacity to cater for increasing needs.

SIMUNJAN: Simunjan’s long outstanding water woe is expected to be over by end of September when the water mains from Gedong are connected to this coastal town.

Simunjan assemblyman and Assistant Minister of Resource Planning, Datuk Mohd Naroden Majais disclosed that when the water mains are completed by then, Simunjan town as well as areas in its vicinity will be supplied with clean treated water from the Slabi water treatment plant in Serian.

“Planning for treated clean water supply to Simunjan, Sebuyau and its surrounding areas takes into consideration the needs of the people there for the next 10 to 15 years.

“The supply of clean treated water is also vital for the proposed Simunjan new township which will take between 10 to 15 years to implement,” Naroden told the media after distributing Bubur Lambuk and funds to mosques and suraus at Simunjan Mosque here yesterday.

He added that the water reservoir in Simunjan which has been used since the 50s will be deepened to ensure there will be enough water even during dry seasons especially in the months of May to July.

“We are also digging the Simunjan reservoir deeper so it can have bigger capacity and with water from Serian, water problem in Simunjan will be a thing of the past,” he said optimistically.

Naroden said the water woe in Simunjan was a result of the town’s growth which now has a population of 10,000 people.

“The master plan of the new township will include housing, commercial building, entertainment centres, petrol kiosks, schools and other amenities,” said Naroden.

He disclosed that housing was needed urgently especially for some 4,000 workers in oil palm plantations in the district.

“Since the housing project has been approved, it will cater for the increasing demand from the people as well as these workers, otherwise they would leave this town and go somewhere else,” stressed Naroden.

The Assistant Minister of Entrepreneur Development especially made the effort to bring us to Simunjan after The Borneo Post Adventure Team’s third edition (BAT3) highlighted the water woes in Simunjan on July 15.

Meanwhile Naroden believed that the next decade would see Simunjan becoming a booming central commercial centre that will serve Sebuyau and Gedong and the surrounding villages.

“Siminjan by then will be well linked to Asajaya, Sebuyau and Gedong as well as by the road from the junction from Bukit Punda with the completion of Sageng Bridge near Simunjan by end of September as well as the Sg Buluh Bridge in future,” he said.

Meanwhile, he expressed optimism that the people’s livelihood would gradually improve with the opening up of more land for agriculture, especially for the cultivation of oil palm.

Previous ArticlePetronas not so RAPID, project delays to have negative impact
Next Article Snowdan still chairman of PRS Balai Ringin