Thursday, April 9
You are at:Home»News»Sarawak»Tourist arrivals rise 4 pct in first 5 months of this year 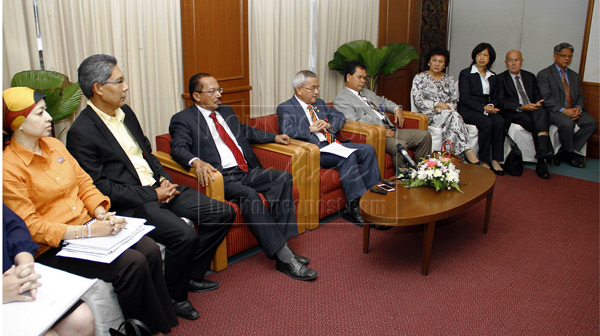 MEETING THE PRESS: Talib (fourth left) speaks to reporters after the 51st STB board meeting on Tuesday night. With him are members of the board. — Photo by Chimon Upon

KUCHING: The state recorded four per cent increase in tourist arrivals from January to May this year, a growth of 1.7 million compared to the corresponding last year.

Domestic arrivals – from Peninsular Malaysia and Sabah – also showed an increase of 12 per cent (636,207 visitors).

Revealing that it was good news for the state, Assistant Minister of Tourism Datuk Talip Zulpilip expressed optimism that the state would meet its target of 4.2 million visitor arrivals before year-end.

“The trickling down effect will help the local economy and the business community,” he said after chairing the 51st board meeting of Sarawak Tourism Board (STB) at a leading hotel here on Tuesday night.

On another matter, Talip said he was impressed by the good turnout at the Rainforest World Music Festival (RWMF) 2013 organised by STB, which attracted an attendance of 22,390 during the three days it was held.

“It was a resounding success as 73 per cent of those attending were non-Sarawakians and the economic spin-off was estimated to be worth RM37 million,” he enthused.

Talip disclosed that media support was very encouraging with many media personnel from BBC, National Geographic and other media groups from around the world making their own way to the festival.

“Stories are still being written about the festival and we anticipate a media mileage of 50 million which includes pre-publicity. Our local newspapers, radio and television have done an excellent job and I would like to say thank you,” he added.

Talip also revealed that STB has received numerous international recognitions including the Pata Gold Award winner – ‘Sarawak Tourism Re-imaging Campaign’ in the Marketing and Media Travel advertisement (print media) – which will be presented on Sept 15 in Chengdu China.

He also said STB has been shortlisted for the TTG UK Travel Award for Destination of the Year, for which the winners would be known in September. Among the finalists are Brand USA, Cancun and Tourism Australia.

Talip also announced that STB will host a new event in Bintulu – the Asia Music Festival from Oct 4 to 5 at Park City Everly Hotel.

“It will be an electric mix or ‘rojak’ genre of music plus funfair filled activities targeting Bruneian middle working class, expats from Brunei, Indonesians, Filipinos, Thais and Indians.”

In addition, Star Cruise will make its maiden stop at the town from Kota Kinabalu (KK) on Nov 12.

“It is also the passenger ship’s inaugural sail from KK and Brunei to Bintulu and it is scheduled to be in Bintulu Port every Tuesday at 1000 hours,” he added.