Thursday, August 11
You are at:Home»News»Sabah»RM30,000 for single mothers to start Herbs Plantation Project 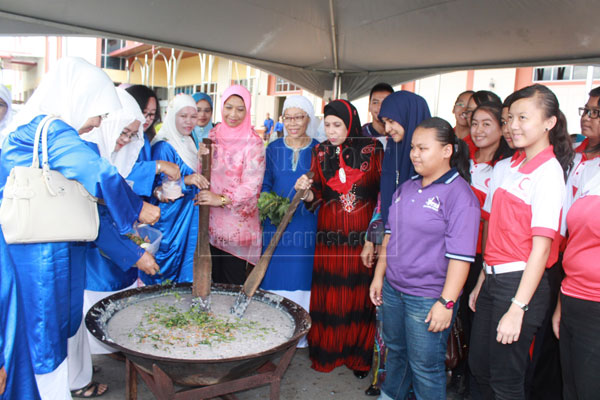 Jainab (sixth right) teams up with the volunteers to stir the Bubur Lambuk together with Norhanida (seventh right) and PITSA members.

Disclosing this here yesterday, Jainab said her ministry had contributed RM30,000 towards the first phase of the project which would start in three districts soon.

“The government is always ready to help those single mothers out there but they must follow the procedures,” said Jainab after distributing Bubur Lambuk to members of Sabah Single Mothers Association (PITSA) at Wisma Wanita here yesterday.

She also urged single mothers to register themselves as PITSA members so that they would have the opportunity to join any project such as the Herbs Plantation Project.

“This is what we call the three-in-one project involving homestay, medical-tourism and eco-tourism, and travellers who come to Sabah usually like to go for ‘nature shopping’,” she added.

Meanwhile, PITSA president Norhanida Annol said the organisation had identified several districts for this project such as Kimanis, Moyog, Kota Belud or Keningau.

“We will use the cash to start the project, to plant and to produce herbs and these single mothers will be divided in several groups of about 20 persons each,” Norhanida explained.

She said to strengthen their upcoming project, PITSA would ask for assistance from Ministry of Health under Traditional Complementary Medicine (TCM).

“We want to teach our single mothers according to their interests and if this project is beneficial to them, we will think of expanding this project in the future,” she said, adding that herbs are very important for health, socioeconomy as well as tourism attraction.

Norhanida, who plants her herbs at her own garden, also said that by planting these herbs the single mothers could use them for medical purposes such as pegaga which could be used as anti-stress, Sabah Snack Grass to treat cancer and African Tea Leaves for persons who have cholesterol problem.

“But these herbs must be taken according to their dosage and that is why we are inviting TCM of the Ministry of Health to help us in this project,” she added.

About 100 single mothers from various districts attended the event. They also received assistance from Bernas and Baitulmal.

Fifteen volunteers of the Pusat Sukarelawan Sabah under the Sabah Society Services Council, Sabah Red Crescent and PITSA members were involved in cooking and distributing the Bubur Lambuk.