Tuesday, August 9
You are at:Home»News»Sarawak»Two more killed in road crash near Sri Aman 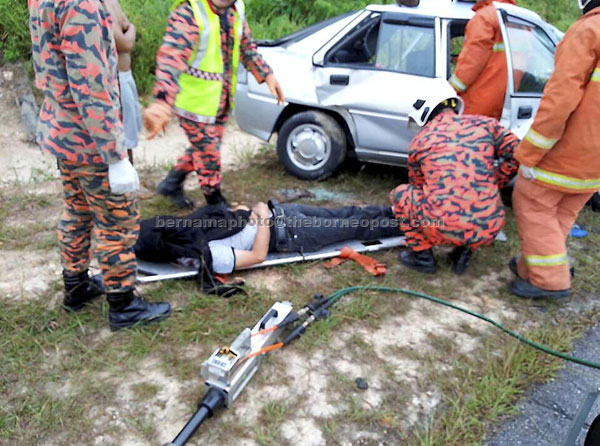 DEAD: The body of one of the victims lying at the accident scene. — Bernama photo

KUCHING: The death toll from road accidents on the Sri Aman-Sarikei stretch of the Pan-Borneo trunk road in Sarawak rose to 10 yesterday in less than a month after two more people died yesterday.

In the latest incident which occurred at Km57 of the stretch at about 6.40am, Anthony Wong Siow Wei, 28 and a 26-year-old woman, Ling Lee Chen, died on the spot after a Proton Iswara car that they were travelling in collided with a Perodua Viva.

Sri Aman OCPD, DSP Mat Jusoh Mohamed in confirming the incident said both drivers, Ling Tai Hung, 24 and Nora Karu, 40, along with another passenger inside the Iswara, Stephanie Ting Xiang, 20 were seriously injured and taken to the Sarawak General Hospital here.

On July 10 this year, four Indonesians were killed in an accident between a MPV and a truck at Km56 of the road. As the MPV had caught fire after the collision, three of the victims who were trapped inside it were burnt beyond recognition. — Bernama