Saturday, August 20
You are at:Home»Business»BizHive»What Malaysian negotiators don’t want you to know about the TPP 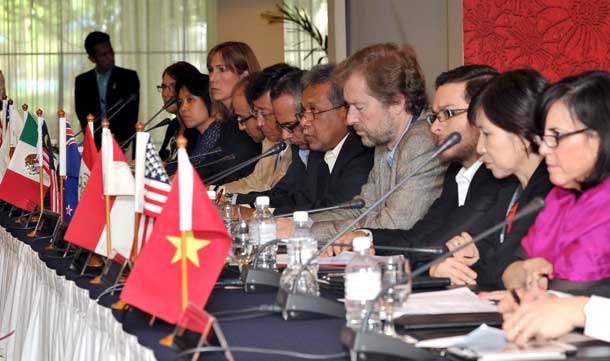 The sheer magnitude of the US-led Trans-Pacific Partnership (TPP) has not been lost on Putrajaya. The ambitious free trade agreement (FTA) involving 12 nations in Asia and along the Pacific Rim would encompass 800 million people worth trillions of US dollars in trade if the eight negotiating countries sign into the pact, standing at a direct counterweight to China’s rough-handed approach to influence Southeast Asia.

The Malaysian federal government has, however, kept the text of the trade negotiations shrouded in secrecy, leading to acrimony amongst business leaders and traders who criticise officials for not revealing the wider implications the pact could have on the private sector.

Malaysia’s top negotiators in the agreement have stepped forward in an attempt to quell fears, only to respond in muted answers that the FTA talks must not be made public out of respect to other negotiating member nations.

What these negotiators would rather the public not dwell on are the crisscrossed intricacies that surround accurately weighing the costs and benefits of joining such as colossal new world order.

Sarawak, in particular, an export-led economy and Malaysia’s largest state, must methodically shuffle through the series of effects the agreement could ripple through its leading industries, which depends on what new trade avenues are paved with the agreement.

The TPP’s ultimate value depends on just how many players come in, with others being worth considerably more. From multiple vantage points, the most valuable player for Malaysia is Japan, which is still locked in the middle of hard negotiations for membership, along with the US, Australia, Peru, Vietnam, Mexico, Canada and, of course, Malaysia. (As founding members, Brunei, Chile, New Zealand and Singapore have already opened their doors for free trade.)

An overpopulated and mountainous nation, Japan is a major buyer of raw commodities across the nations of Southeast Asia and the Pacific Rim, lacking the resources itself. Across the regions of concern, it gobbles up minerals and natural resources to fuel its developed economy forward. In Sarawak, Japan is the largest buyer of the state’s top export commodities: liquefied natural gas, crude petroleum, palm oil and timber. (Japan is followed by Taiwan, South Korea, China and India.)

Malaysia, by way of Sarawak, will thus only greatly benefit from the TPP if Japan is included in the pact. In 2005, both countries signed the Japan-Malaysia Economic Partnership Agreement, which eliminated tariffs for forestry products, minus plywood.

The elimination of tariffs for Sarawak’s hydrocarbon exports, which make up about 70 per cent of exports, would be the major win for the state, as well as greater Malaysia, if Japan then enters the TPP. This conclusion is similar for neighbouring Brunei as well, which also lists Japan as a major buyer of its hydrocarbon products.

Vietnam’s top exports, crude oil, agri-commodities, textiles and machinery, also are mainly exported to Japan. Indeed, along Singapore, Japan is one of Vietnam’s most important trade partners, with trade expected to reach $29 billion in 2013, up 16 per cent from the year before.

Beyond pushing open doors US products to the shelves of fast-growing consumer markets, the TPP comes with another effect. It is clear that the trade pact aims to counterbalance China in the region, giving negotiating countries an option of China vs the US.

For Malaysia, this is a geopolitical crossroads. “Seven out of twelve of the TPP members have FTAs with Malaysia,” said Fiedo Rosli of the Institute of Strategic and International Studies Malaysia.

Yet the fate of Malaysia if it leaves the negotiating table is hard to see. “Win or lose is a highly debatable [matter]at this point, but do we know the cost of NOT being a member of the TPP?” Rosli said.

That cost is a value likely to be highly determined by Japan.

Justin Calderon is a research analyst at www.investvine.com, a news portal owned by Inside Investor focusing on Southeast Asian economic topics as well aqs trade and investment relations between Asian and the Gulf Cooperation Council. The views expressed are his own.