Thursday, April 9
You are at:Home»News»Sabah»Return of Expedition Mt Kinabalu to promote muscle disease 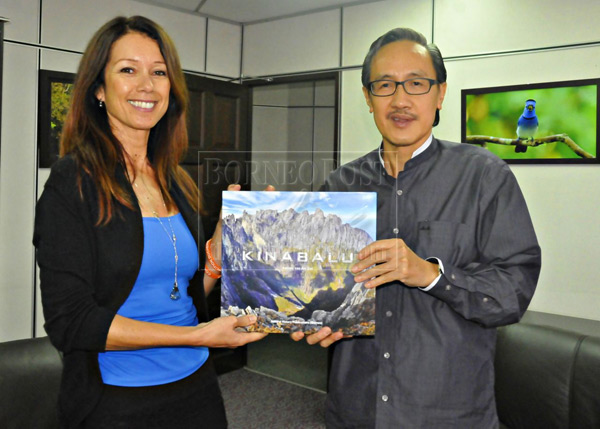 Masidi presenting a book to Catherine. 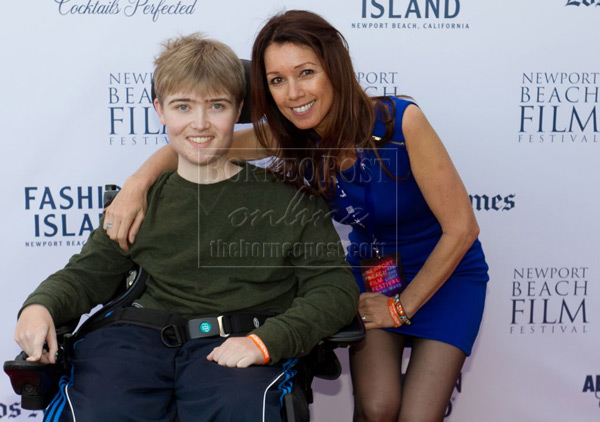 Catherine and her son, Dusty.

KOTA KINABALU: Coalition Duchenne is hosting the third Expedition Mt Kinabalu in Sabah from August 16 to 18 to raise awareness for Duchenne muscular dystrophy, the most common fatal childhood genetic disease.

The annual event has become a showcase of both Sabah’s natural treasures and Sabahan kindness and was featured in Malaysian documentary filmmaker Catherine Jayasuriya’s award winning film Dusty’s Trail: Summit of Borneo (2013).

Catherine is the founder of Coalition Duchenne, a charity that raises awareness and funding for Duchenne research. Expedition Mt Kinabalu is the charity’s largest annual event.

Through both her charity events and movie making, Catherine has become a leading light in global efforts to find a cure for Duchenne and raise awareness for the condition that affects thousands of boys and young men in every country and of every race.

Dusty’s Trail: Summit of Borneo featured prominently in the 2013 Kota Kinabalu International Film Festival. The film has been shown at film festivals worldwide and has received several prestigious awards.

Inspired by her 20-year-old son, Dusty Brandom, Catherine’s film is the story of Dusty’s journey with Duchenne. The film tells about people coming together from around the world to climb Mt Kinabalu to raise awareness for Duchenne.

“People have told me the film has changed their lives. Dusty’s attitude in the face of adversity, the way he does not even acknowledge adversity, has made people realize that they can overcome obstacles in their own lives,” said Catherine.

Datuk Masidi Manjun, the Minister of Tourism, Culture and Environment, first met with Catherine in 2011 and has played an important role in helping Coalition Duchenne focus international attention on Sabah. Masidi is one of the key personalities interviewed in Catherine’s documentary.

“We must remember Catherine’s roots are in Sabah, and so are Dusty’s,” said Masidi, welcoming them ‘home’ and celebrating their efforts to raise awareness about Duchenne and honor the people and the beauty of Sabah.

Masidi’s confidence that Expedition Mt Kinabalu would draw people to Sabah has been justified. Dusty’s Trail: Summit of Borneo has received rave reviews and generated tremendous interest in travel to the state.

Writing in the Newport Beach, California, USA Daily Pilot newspaper, John Depko said, “The film features stunning footage of their climb up the mountain’s famous alpine meadow ecosystem. These beautiful scenes are intertwined with pointed interviews with doctors, patients and researchers working to cure the disease….Joy, hope and tears get equal time on screen.”

“I was inspired to visit Sabah and climb the mountain after seeing Dusty’s Trail at the St Tropez International Film Festival. The film is an incredible marketing tool for Malaysia – it drew me in!” said Neil McEwan, film distributor and independent producer.

At every screening from St Tropez to Minneapolis, there has been a line of people asking Catherine about Dusty and Mt Kinabalu.

Like Masidi, Catherine’s roots trace back to indigenous Sabahans. Her grandmother, a Kadazandusun, lived in Limbanak, just outside Kota Kinabalu. The Kadazandusun people, who live along the foothills of Mt Kinabalu, hold the mountain sacred and believe that their ancestors’ spirits dwell on the mountaintop.

“The mountain has watched over everything through the years. Like an anchor, the mountain reminded me where I was from and kept on drawing me back, guiding me through some difficult years while I was away from home. It spoke to me of strength and endurance. Throughout life’s ups and downs the mountain remained the same, and so did a certain part of me. It reminded me that despite the changes that life brings, there are fundamental things that always stay the same,” said Catherine.

“My films are in the documentary genre and I am not seeking to create a blockbuster but hope to have an impact by raising awareness and funding for Duchenne. Film is a wonderful medium that can make adifference,” she said.

In one scene, Catherine’s crew followed her to a Kampung where they met a 14-year-old with Duchenne called Azmi. He is shown being helped by his siblings contrasted with Dusty’s life at home in California. The circumstances are very different, but there is a commonality of rising above a shared challenge.

In addition to being an official selection of the Newport Beach International Film Festival in California and the Minneapolis Film Festival in Minnesota, Dusty’s Trail: Summit of Borneo received Best Feature Documentary and Best Visual Effects awards at the Los Angeles Movie Awards, and Catherine was awarded Best Director of a Feature Documentary.

“There are still a few spots remaining for this year’s expedition,” said Catherine. The event kicks off with a festive flag-off at the Shangri-La’s Tanjung Aru Resort in Kota Kinabalu on August 16.

Interested climbers can reach Catherine by email at [email protected] or through the Coalition Duchenne website at www. coalitionduchenne.org.

“Dusty and I want to inspire people to be in the present moment and live their lives to the fullest,” said Catherine.

Previous ArticleTwo held over Sabah shooting
Next Article MP vows to get housing for the poor, squatters in Sepanggar