Wednesday, January 29
You are at:Home»News»Sarawak»Farm getting popular as eco-tour destination 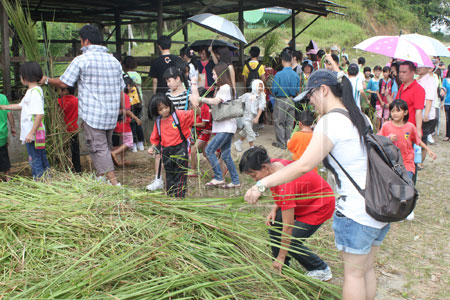 EXCITEMENT IN THE AIR: Visitors relish the real life experience of feeding the goats.

SIBU: A goat farm at KM28 Oya Road is fast gaining popularity among the local people as a place to unwind while sampling the environment to make up for the lack of picnic spots here.

Executive director of TYC Goat and Livestock Sdn Bhd Adams Tang Jung Lung said based on their record some 10,000 people from all walks of life had visited their farm populated mostly by goats besides chickens and rabbits.

Given the good response, he said he was mulling to set up a mini zoo and would bring in small animals for a start.

He revealed that the population of the goats, which are the major attraction of the farm, had grown steadily to about 800 from the initial 20 in 1995 bought from nearby places such as Bintangor and Sarikei.

“Churches and schools topped the list as they organised groups for an educational tour of our farm. Here, visitors will have an unforgettable experience as they would be brought to various stations such as vegetables and earthworm (composting process) sections before stopping at the last station to feed the goats.

“Children really enjoy feeding the goats,” Tang told The Borneo Post when asked about their eco-tour which is fast gaining popularity.

Besides goats, he said the 80-acre farm has about 2,000 chickens and over 600 rabbits which add to its attraction.

On the eco-tour, he recalled that it started by chance when he invited a group of kindergarten pupils and their teacher to his farm several years ago.

“The children were so excited upon seeing chicken hatching eggs and the poor teacher was swarmed with questions. This gave me an idea to initiate the tour for educational purposes.

“You see, urban children rarely have the opportunity to touch real animals which they only see in books or pictures. I recall an incident when a primary school pupil shouted in excitement about the huge size of the goats,” he said, adding that the eco-tour came into being some two years ago.

He, however, said the idea of starting a goat farm stemmed from their family’s background as his grandfather used to operate a farm which supplied quail eggs to restaurants in the 80s.

He related that the farm started on a small scale in the 90s, where they also planted fruit trees such as star fruit and dragon fruit.

On the entrance fees, he said those coming in groups of at least 30 would be charged RM5 (per adult) and RM3 (per child).

He assured that the farm is free from air pollution because they use a Japanese technology to treat the animal droppings.

On a reacted matter, Tang disclosed that goat’s milk which is sold at the farm has a myriad of uses, saying they can be processed and turned into drinks and ice-cream.

“The goat milk soap is an organic way to take care of your skin. It will moisturise, clean and nourish your skin without irritation.

“It comes in several scent such as lavender, rose, orange and lime,” he added.

He said unlike in the past, they now breed the goats for their milk rather than meat.

“We still supply to the slaughter market but it is difficult to compete on price,” he elaborated.

Asked on his future plans, Tang revealed that they would want to build up their business in Sibu before spreading their wings to Bintulu and Miri.

“For now, we would not venture into export markets as we need to strengthen our base here first,” he said.