Sunday, June 7
You are at:Home»News»Sarawak»Divers in sea-hunt for drop site of reef balls in Bintulu 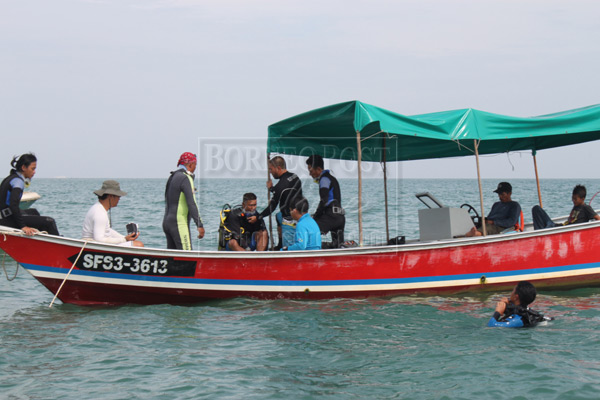 LET’S GO: The diving team suiting up on the boat before one of many dives to investigate the conditions of the seabed where they intend to deploy reef balls.

KUCHING: When Malaysia LNG Group of Companies and the Sarawak Forestry Corporation (SFC) teamed up to save the marine ecosystem in Bintulu, they needed divers to send ahead and evaluate the drop site.

Fortunately, they had to look no further than within their own ranks for both divers and an experienced dive instructor.

Helming the dive team for BEACON (Biodiversity, Environment and Conservation) is Christopher Cri, 54, an SFC enforcement officer who also happens to be an instructor with National Association of Underwater Instructors (NAUI).

With over 20 years of diving experience, Chris is proud to be onboard this pioneer project, lending his skills to keep his team safe and do what they go underwater to do – make sure the sea bed in a certain location can take a cluster of reef balls.

The reef balls used for this project weighs about 2 tonnes each and has an expected lifespan of 500 years. It is made of a special material that mimics natural limestone.

It is non-organic and non-toxic, but has rough surfaces suitable for settlement of coral polyps and other micro organisms. The hollow centre offers shelter for marine life such as turtles. The sharp outside edges is also a deterrent for destructive trawlers nets.

The benefits it will bring to marine life in the area is great, but first, the BEACON divers must make sure the reef ball does not sink into the silt and disappear.

Chris explained that what they look for at the sea bed is ‘stability’.

“You can measure it with a stick. You dig a certain depth and then feel for stability. If you can feel the hard clay soil under the silt, then the sea bed is stable.”

In the sunny June days before the deployment of the first 200 reef balls, the waters off Similajau National Park was found to be unsuitable. The sea bed was muddy and visibility was almost nil. The team spent three days straight diving.

Wahid Kep, said that with zero visibility, it was a very good thing that neither he nor any other diver in the team succumbed to claustrophobia.

“It was quite an experience. There are a lot of species down there, and I’m looking forward to more dives,” he said.

“I have been diving ‘kampung-style’ since I was young,” he said. The village rivers and streams were enough to satisfy a boy, but Wahid always dreamt bigger.

“My dream was to explore the environment underwater and enrich my knowledge.”

At 52 years old, he can write this off as a dream-come-true.

MLNG civil technician Budi Mulyadi, 36, wanted to be a scuba diver ever since watching a TV programme about the underwater world as a little boy.

“I really care for nature, and this project is a chance for me to explore more of it,” he said.

Jovial and outgoing, Budi tends to jump straight into any outreach programmes organised by MLNG, whether it is caving in Niah or building houses for Penan families.

While fairly new to diving, he is glad to be on the team and rake up more experience.

BEACON will deploy up to 1,500 reef balls off the coast of Similajau National Park over a period of three years. The project was initiated to protect shorelines and local fishing grounds and create sanctuaries for marine life such as turtles.

The second component of the project is the Conservation, Education, Promotion and Awareness (CEPA) programme, which aims to increase community awareness of preservation and appreciation of the nation’s natural heritage.

It will include a turtle conservation programme, including hatcheries.