Monday, February 24
You are at:Home»News»Sarawak»Spiralling violence a BN ploy? 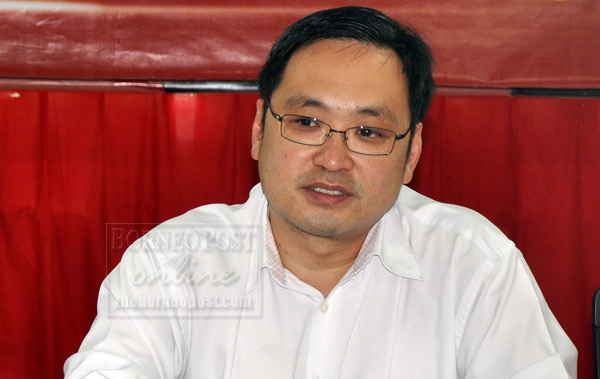 Our suspect is that crime rates are deliberately allowed to skyrocket and the police are taking a couldn’t-care-less attitude about crime so as to give justification for Zahid to reintroduce laws like EO. – Chong Chieng Jen, Bandar Kuching MP

KUCHING: The Barisan Nasional (BN) government is deliberately allowing crimes in the nation to rise to justify reintroducing preventive laws.

Bandar Kuching MP Chong Chieng Jen made this startling claim at a press conference held at the DAP headquarters here yesterday commenting on the recent spike in violent crimes in the country.

“Of late there are certain sectors in BN including Zahid (Home Minister Datuk Seri Ahmad Zahid Hamidi) who have been using the increase in crime rate and gun shooting as grounds to reintroduce preventive laws like the EO.

“Our suspect is that crime rates are deliberately allowed to skyrocket and the police are taking a couldn’t-care-less attitude about crime so as to give justification for Zahid to reintroduce laws like EO which will give Zahid as minister of home affairs the uninhibited power to silence dissidents and to oppose and suppress the opposition,” he suggested.

Chong, who is also the State DAP chairman said that EO gave tremendous uncontrolled power to the police and to the Home Ministry to suppress any dissidents including those from the opposition.

“In so doing the people are made the victims of the political agenda of BN,” he added.

Chong further deliberated on his allegations by citing incidents which took place recently in the political arena including the threat by Registrar of Societies to deregister DAP.

He said once such laws such as EO were reintroduced the BN government could just arrest anyone including opposition leaders without giving any reason and the detentions could not be subjected to court scrutiny.

Chong further claimed that only 14.2 per cent of the nation’s police force were directly dealing with criminal investigations or fighting crime and he pointed out that it was the main reason why the police had not been able to control crime.

He said 50 per cent of the total police force should be deployed to combat crime.

Commenting on Chong’s claim, Deputy Home Minister Datuk Dr Wan Junaidi Tuanku said it was the most irresponsible statement of all.

“However, the government is not going to reintroduce law against political opponents. If there is any preventive law to be introduced now it will be against criminals and crime related activities.

“We are hoping that the opposition would help the government to fight crime,” the Santubong MP said in a text message to The Borneo Post.