Friday, July 1
You are at:Home»World»Hunt for escapees after new jailbreak 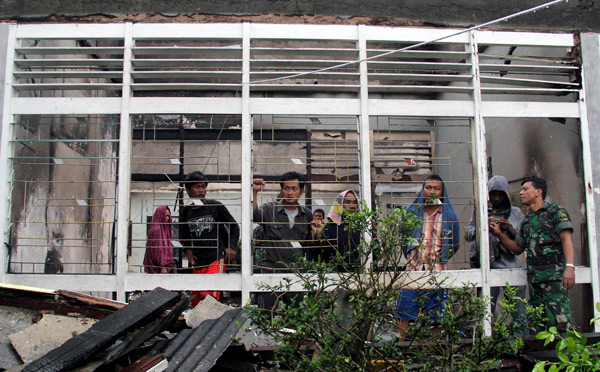 SECURING THE PRISONERS: An Indonesian soldier stands guard as inmates stand inside a burning room at the Labuhan Ruku penitentiary in Labuhan Ruku. — AFP photo

LABUHAN RUKU, Indonesia: Indonesian security forces yesterday hunted for a group of inmates who escaped from an overcrowded jail on Sumatra island, in the latest breakout to hit the country’s decrepit prison system.

Prisoners rampaged through Labuhan Ruku jail on Sunday, setting fire to the building and attacking wardens, angered at a failure to give them sentence reductions and their treatment.

“Seven inmates have still not returned,” he added.

The prison had been almost three times over its capacity of 300 inmates when the violence erupted.

Officials did not know what offences the escapees had committed although Labuhan Ruku is not a high-security jail and was unlikely to be holding serious offenders, such as terrorism convicts.

Following two jailbreaks in Indonesia in July, Interpol issued an alert saying it suspected al-Qaeda involvement in those breakouts and other escapes that occurred around the same time in different countries.

However, Indonesian officials have played down the possibility of links between the jailbreaks and the terror network.

“We see no indications of al-Qaeda links,” he told AFP.

Around 350 police were guarding the roads around the prison complex, parts of which were fire-blackened and badly damaged, an AFP reporter at the scene said.

Inmates had been moved to a church and a mosque within the complex.

A prison guard sustained minor facial injuries in the unrest but there were no other injuries, said Budi Sulaksana, head of the government’s justice and human rights office in North Sumatra province.

The violence flared when some inmates became angry that they were not given sentence cuts on Saturday, Indonesian Independence Day, when convicts are traditionally given remissions.

“Around 80 inmates protested because they did not get remissions,” Taufik, a prisoner held in Labuhan Ruku who like many Indonesians goes by one name, told AFP.

“We were also unhappy that we were treated badly by the guards, they put us in tiny isolation cells for the smallest offences and chained us up,” added the inmate, who is being held for drug offences.

Sunday’s breakout followed the two in July from Indonesia’s prisons, which are generally grim and overcrowded.

In the first, some 150 prisoners, including terror convicts, escaped from a jail in Medan, also on Sumatra.

Days later 11 prisoners, all serving time for drug offences, escaped from a jail on Batam island, part of the Riau Islands chain south of Singapore. — AFP