Saturday, June 19
You are at:Home»World»Sixteen dead as Indonesia bus plunges into river 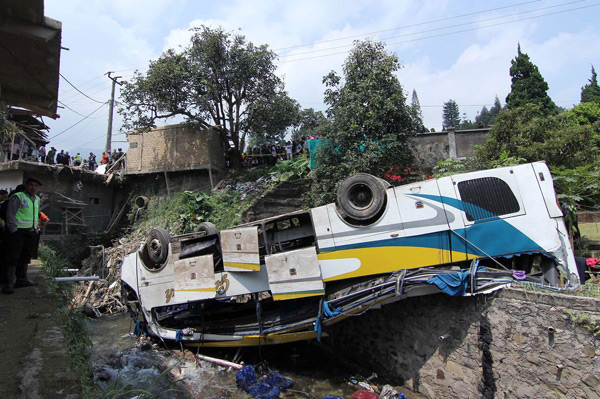 DEADLY PLUNGE: An Indonesian policeman (far left) stands next to an overturned bus as they examine the scene of the road accident in Cisarua, Bogor, in West Java. — AFP photo

CISARUA, Indonesia: Sixteen people were killed and dozens injured yesterday when a bus plunged into a river as it returned from a church outing on Indonesia’s main island of Java, police said.

The bus was carrying 60 passengers from a Jakarta church back to the capital after a visit to a hill resort when the accident happened in Cisarua, West Java province, local police spokesman Martinus Sitompul told AFP.

It collided with a pick-up truck then crashed into a food stall before falling up to eight metres (26 feet) into the river.

“Sixteen people died, 32 people were seriously injured, and 10 others were lightly injured,” he said.

“We suspect the brakes malfunctioned but that’s still being investigated.”