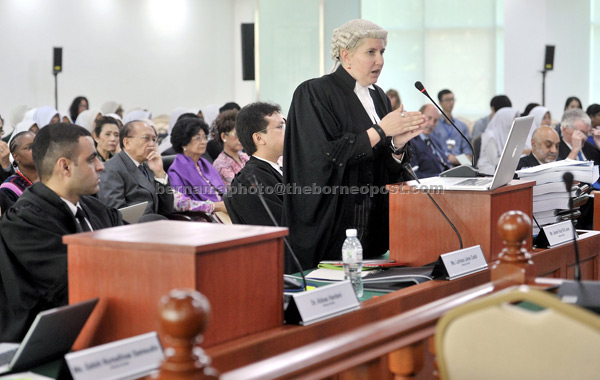 KUALA LUMPUR: The first day of hearing on war crimes against former Israeli army general Amos Yaron and Israel at the Kuala Lumpur War Crimes Tribunal (KLWCT), ended in a deadlock when the judges panel turned down an application by the prosecution’s lawyers to recuse one of the judges.

The ruling by KLWCT President Tan Sri Lamin Mohd Yunus and his seven-member panel also resulted in the witnesses’ unwillingness to testify, stating their ‘lack of confidence’ in the panel.

At the start of the hearing in Jalan Perdana here, Lamin had dismissed Prof Francis Boyle’s application, in which he alleged that Judge Eric David was linked to Israel’s intelligence agency, Mossad.

Boyle’s application was made on the grounds based on a legal opinion written by David last year, in which he suggested that the People’s Mujahedin of Iran (PMOI), a movement listed by the United States of America as terrorist organisation — be removed from the list.

The movement was purportedly supported and funded by the Mossad.

In the ruling, Lamin said the bench had found no element of bias on that matter.

“Once the ruling had been made, there should be no attempt to re-open the issue.”

Lamin also instructed the registrar to expunge all allegations levelled against David from the records.

In response, lead prosecutor Prof Gurdial S Nijar said the witnesses were concerned over the matter and conveyed their three-point concern to the panel, namely integrity of the panel, fear for their personal security and on the matter of principle.

“They have come for justice and are prepared for any decision, but in the present situation, they are not comfortable to appear before a judge that may be biased.

“They want the process of obtaining justice untainted in any way,” he said.

Webre rebuked the prosecution for falsely maligning a respected member of the tribunal, adding that David was a highly respected member who had appeared in several Russell Tribunal proceedings previously.

Lamin later intervened and called for an adjournment, and the matter was taken to the chambers.

The judges also called the legal teams into the chambers and after a lengthy discussion, announced that the tribunal was adjourned.

Yaron was charged for his direct involvment in his capacity as the commanding general in the Sabra and Shatila massacre in Beirut in 1982.

This was the first time that Yaron was charged for war crimes.

The second charge was against the State of Israel for the crime of genocide and war crimes on the Palestinians.

The charges were the result of complaints received by KLWCT from victims from Palestine (Gaza and West Bank) and the Sabra and Shatila refugee camps in Lebanon, last year.

The trial is adjourned to 9.30am today. Nine witnesses are expected to testify. — Bernama