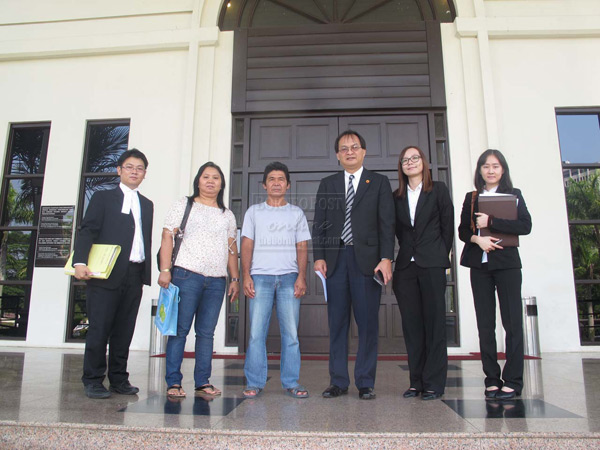 SETTING THE RECORD STRAIGHT: Baru (third right) with his legal team and Jumi outside the courthouse.

KUCHING: The Land and Survey Department has been told to be vigilant in land title transfers to avoid fraud.

In giving this advice, PKR state chairman Baru Bian said they had received a complaint from a landowner that his land with a registered title had been fraudulently transferred to a third party without his knowledge.

Believing this was not an isolated case, Baru, who represented the complainant Jumi Tumbek, 51, from Kampung Sudat, said his legal firm had encountered three similar cases.

Through a press statement, Baru said Jumi claimed that his land at Lot 4481 Block 225 Kuching North Land District had been fraudulently transferred to another person.

“We believe that there are certain agents who are colluding with the authorities to transfer the land fraudulently in an attempt to obtain the land by circumventing the law,” he said.

“As a lawyer, I urge the Land and Survey to take this matter seriously as it will affect all registered land titles all over Malaysia. They should play more active role to ensure that both parties are present before them during the signing of the Memorandum of Transfer and probably the department should consider implementing a stricter process when registering a memorandum such as obtaining the transferor and the transferee’s thumb print and print out their identity cards before such transfer can be done,” he stressed.

Jumi has filed a civil suit against the defendant, claiming that the transfer of the land title was null and void as he was the rightful owner and in possession of the original copy of the land title.

It was learned that both the plaintiff and defendant never met each other.

The defendant who possessed the land without knowledge even lodged a police report last month stating that he had never dealt with the land and that he had no idea that the land had been transferred to him.

Yesterday, High Court judge Datuk Rhodzariah Bujang allowed the application made by Jumi with no cost imposed on the defendant.

Baru told reporters that Jumi was lucky as the said land was transferred to the defendant, who was honest and even assisted them to enable the land ownership to be transferred back to him (Jumi).