Saturday, January 29
You are at:Home»Business»Malaysia willing to share knowledge with South Africa to undertake transformation programme 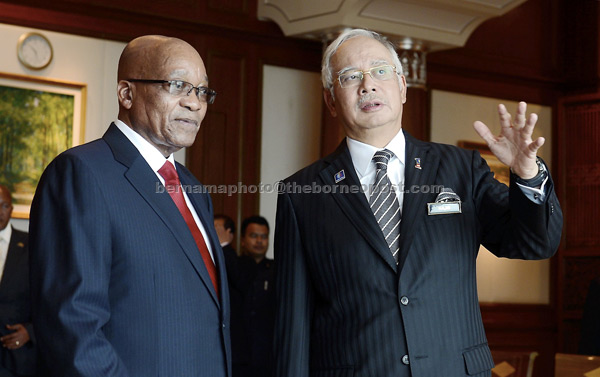 “South Africa is keen to look at how we execute our transformation programme. He invited Datuk Seri Idris Jala to make a complete presentation to the South Africa government soon,” he said.

Idris Jala is the Minister in the Prime Minister’s Department and the chief executive officer of Pemandu.

Pemandu is the unit that monitors implementation of the Key Performance Indicator (KPI) initiative.

Najib said Malaysia was sensitive to South Africa’s needs, particularly in getting the majority of the people there to benefit from economic development projects and programmes.

“The issues raised by President Zuma in terms of affirmative action, creating jobs and fighting crimes are issues familiar to us.

“We are ready to contribute our experience,” he added.

Najib said there was huge business opportunities for Malaysian companies in South Africa particularly in infrastructure development, power generation and ws development of airports and ports.

“Malaysian companies stand ready to participate in the infrastructure development in South Africa, depending on the terms and conditions that are offered to them.

“We also would like to look at the future of our investments in South Africa particularly by Petronas,” he added.

He said the ministers in his delegation were looking at ways to intensify trade relationship with Malaysia.

He said Malaysia was not really able to determine whether the trade balance would favour the country or its trading partner but “what is important is for the overall trade to be balanced and managed in a prudent manner.

“At the moment, our trade with South Africa is in our favour, but we also have trade balance with other countries, which is not in Malaysia’s favour, but as long as the overall trade balance is still in the positive territory, we are happy with that,” added Najib, who is also the Finance Minister. — Bernama