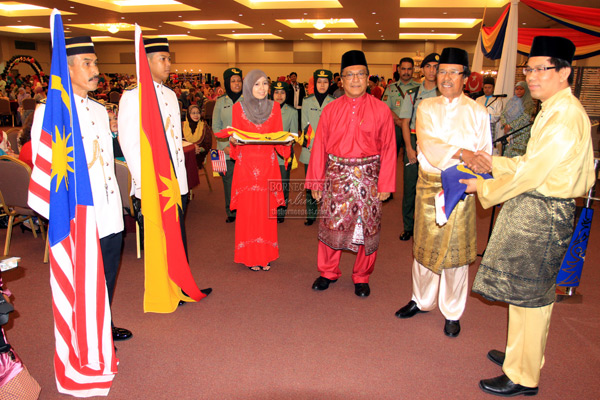 FLY IT: Hatta (second right) giving away a Jalur Gemilang to a representative during the Unimas Aidilfitri at DeTAR Putra. — Photos by Jeffery Mostapa. 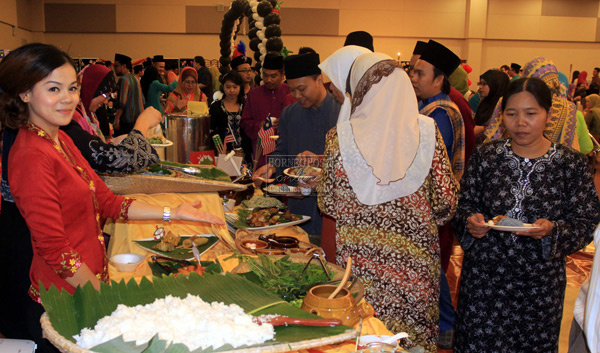 EAST COAST FLAVOUR: One of the stalls representing the state of Kelantan at Unimas Aidilfitri.

Nineteen food stalls under the ‘Malaysia Raya’ theme served food to all visitors at the DeTAR Putra Unimas yesterday.

The annual event organised by the university gave visitors a chance to try food found around the country. Out of the 19 stalls, 14 served signature food from all states in Malaysia.

They were competing to be judged Best Stall that day. Points were given for how well operators decorated their stalls, prepared the food, and understood the culture of the states represented.

“I am excited to try out the food here today. Some are rarely found in Sarawak or I’ve never heard of,” said Othman Yusof, a Unimas staff interviewed.

In his speech yesterday, Mohamad Kadim said it was the first time the university’s Aidilfitri celebration was held at DeTAR Putra.

“I congratulate all those who have worked hard to make this event a success,” he said.

During the same function, he too gave away Jalur Gemilang to faculty, institute, centre and division representatives of Unimas.

The ceremony marked the start of the ‘Fly the Jalur Gemilang’ campaign organised by the university.