Sunday, May 9
You are at:Home» 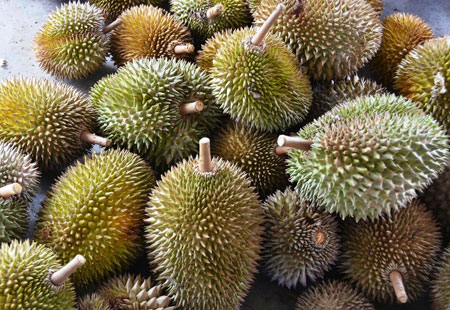 LOVE them or loathe them, durians, widely known as the King of Fruits in South East Asia, have earned quite a reputation for their distinctive smell and unique flavour.

Anthony Bourdain, well-known American chef, author and television personality, in one of his travel and food shows in South East Asia, related his encounter with the durian: “Its taste can only be described as indescribable, something that you’d either love or despise.”

Well, it turns out he is a fan of the fruit.

Durian, a fruit native to South East Asia, gets its name from the Malay word duri which means thorns. Durian literally means thorny in Malay.

The durian season appears to be just around the corner in East Malaysia while in some parts of the Peninsula, it is now reaching the tail-end of the season.

In Malaysia, the fruiting season differs slightly between the growing areas in the different regions or states although the best season is believed to be during the hottest and driest months between June and August.

The arrival of the durian season is a time when pop-up roadside stalls can be seen offering varieties of durians for sale – from the kampung (village) variety to the farm-produced hybrids, one of which is the Musang King, prized for its creamy, bittersweet and fleshy pulp, and is one of the most sought after by durian aficionados.

So sought after in fact that Macau’s casino boss Stanley Ho reportedly sent his private jet to Singapore to purchase these (Malaysia imported) durians. Indeed, durian lovers are willing to fork out the big bucks and go to great lengths to savour their favourite fruit.

Apart from the unique characteristics that define their aroma, flavour, and texture, the durian has a diverse and rich nutrient profile, providing various health benefits.

Dietary fibrefor digestive health: Durian is a high fibre food, which may help you overcome constipation. The dietary fibre in durian, both soluble and insoluble, is known to promote a healthy digestive tractand reduce the risk of colon cancer.

Feel-good factor: Durians are exceptionally high in the essential amino acid, tryptophan, which the body uses to produce melatonin, serotonin and niacin (or vitamin B3).

Melatonin is a sleep hormone that induces sleep while serotonin is a neurotransmitter that helps to regulate sleep and mood, and contributes to the feelings of happiness and well-being.

Vitamin B-complex for good health: Rare in other fruits, the durian contains the B-complex group of vitamins – niacin, folate, vitamin B5 as well as in higher concentrations, vitamin B6, thiamine and riboflavin.

Vitamin B6 supports the immune system and aids the body in breaking down protein, and like tryptophan, helps the body make the neurotransmitter serotonin (to fight depression) and melatonin (to relieve insomnia).

Thiamine helps cells convert carbohydrates into energy. It is also essential for the functioning of the heart, muscles, and nervous system. Riboflavin in durians may help to treat migraines.

Good source of essential minerals: Iron and phosphorus contained in the durian are 10 times higher than that contained in the banana. Iron is beneficial for people with anemia; phosphorus for dental health while manganese helps to regulate blood sugar levels.

Powerful aphrodisiac: The Javanese believes the durian is an aphrodisiac, hence the old saying: durian jatuh, sarong naik, or literally “when the durians fall, the sarong goes up.”

This aphrodisiac claim was supported by scientists from India, who found that male

mice fed durian over a 14-day period, demonstrated increased libido as well as an increase in both their sperm count and sperm mobility.

Durians can cause weight gain since they contain more fat than other fruits and are dense in calories – one seed durian (about 40g) has 54 calories.

Traditional Chinese Medicine (TCM) believes the durian is a “heaty” fruit and excessive consumption may lead to sore throat and other discomfort. To counteract this “heatiness”, it is suggested that one drinks salt water, coconut water or herbal drinks that have cooling and hydrating properties.

Due to the high sugar and carbohydrate content, people with diabetes must limit their durian intake. Although the durian is a cholesterol-free food, the high fat content can affect your cholesterol level.

According to the USDA, durians contain no saturated fat, however, an independent study found that saturated fat in four Malaysian cultivars (D24, D2, D8, D66) ranges between 58 per cent and 65 per cent of their total fat content (Berry, 1981).

It is advisable for people with pre-existing conditions like high cholesterol levels as well as those with hypertension to consume the fruit in moderation, especially since there have been reported cases associating excessive durian consumption with major complications like heart attack.

The durian, being a rich fruit that is high in fat, carbohydrates and sugar, should not be consumed with a heavy meal or with alcohol as this taxes the digestive system and can lead to unpleasant bloating and flatulence.

Apart from eating the creamy flesh out of its husk, durians are also versatile enough to be enjoyed in many forms – e.g. in cakes, ice cream, and other desserts.

In Malay cuisine, fermented durian, also known as tempoyak, is a popular condiment, typically eaten with rice. Dodol, a popular confectionery, is a sweet sticky snack made using the durian with the addition of glutinous rice flour and coconut milk.

Recently, scientists at the University of Singapore reported success in fermenting durians into wine and they are now looking at commercialising the wine.

Popular for its unique characteristics and flavour that is unsurpassed, the durian is truly one of a kind, well deserving  of its title as the King of Fruits.