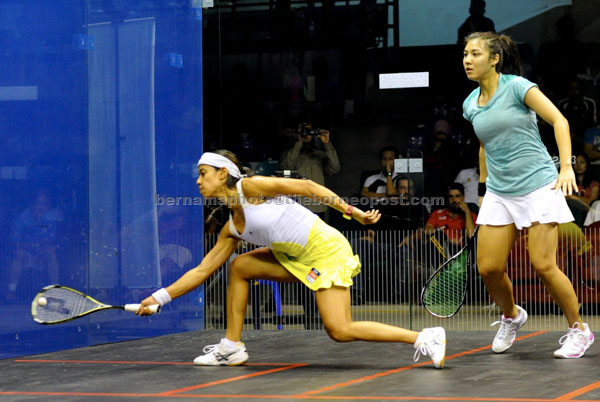 CONTROL: Nicol plays a return to Delia Arnold during their semi-final match at the National Squash Centre.Nicol will meet Low Wee Wern in the final today. — Bernama photo

Nicol, the top seed in the women’s premier category, defeated Malaysia’s number three Delia Arnold in straight sets of 11-5, 11-8 and 12-10.

“It was competitive all the way (playing against Delia). I knew that I had to work each point at a time and not let her to take over. I just kept my focus and tried not to make any mistakes…but she’s also got some amazing shots,” said Nicol after her match.

She will be meeting second seed, Low Wee Wern in today’s finals.

“It is good to get in the court with her. However, it will be a different scenario. I think both of us want the national title.

“The quality of the match is going to be higher than what we had before,” said Nicol, adding that their last meeting this year was at the quarter-finals of the Cleveland Open last February where she won the match 3-0.

Wee Wern booked her berth in the final of the womens premier category after defeating Zulhijjah Azan also in straight setc, 11-4, 11-2 and 11-2.

“I will try to match her (Nicol). Basically she’s the best player in the world and everybody in the world want to beat her.

“I hope I can hang in there and be as long as I can with her. I know the match will turn out to be a good match,” said Wee Wern.

In the men’s premier category, Mohd Nafiizwan Adnan was on the right track in his quest for his first national title, defeating former national Timothy Arnold with identical scores of 11-7, 11-7 and 11-7.

He will be playing against the tournament’s top seed Ong Beng Hee in the final.

“I’m hungry for the national title but he is more experienced than me. I really want to win, last year I think my mind was not ready to play him,” said Mohd Nafiizwan.

“Obviously, its going to be tough. He really wants to win his first national title and as for me, I just want to defend the title,” quipped 33-year-old Beng Hee. — Bernama