Thursday, August 13
You are at:Home»News»Sarawak»Tomorrow’s regatta to be biggest, most exciting yet 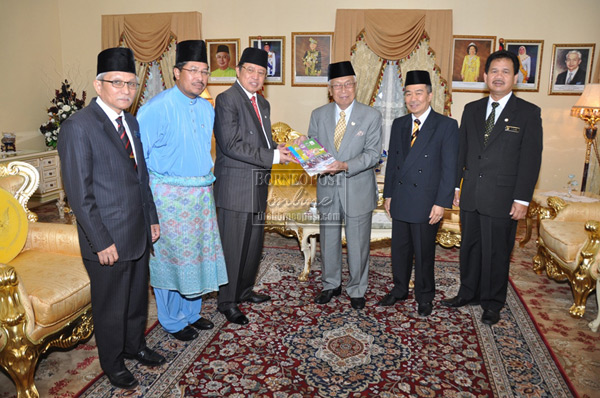 COURTESY CALL: Salahuddin (third right) receiving an invitation from Abang Johari to officiate at the closing ceremony of Sarawak Regatta on Sept 8.

KUCHING: The Sarawak Regatta this year promises to be the biggest and most exciting one yet, featuring a total of 403 teams involving some 7,000 paddlers in various events.

This includes the much anticipated bow of its inaugural Dragon Boat exhibition race which will be participated by countries such as Thailand, Cambodia, Australia (mixed team), Hong Kong, Singapore, Brunei including Penang and Kuala Lumpur representing the home front.

A total of RM95,000 in prize money is on offer, with the winner of ‘King of the River’ title bringing home RM10,000. The total number of participants this year is set to upstage last year’s record of 315 teams.

Tourism Minister Datuk Amar Abang Johari Tun Openg said some of the international participants have arrived in the city.

“The regatta will mirror the solidarity of our multicultural and multiracial society in Sarawak,” he told reporters when met at the Astana here yesterday.

Abang Johari and his entourage were paying a courtesy call on the Head of State Tun Datuk Patinggi Abang Muhammad Salahuddin to invite the latter and his wife Toh Puan Datuk Patinggi Norkiah to officiate at the closing of the Sarawak Regatta on Sept 8.

The visit also included inviting Salahuddin and Norkiah to grace the ongoing Malaysian Craft Promotion 2013 and Malaysian Food Festival to be held from Sept 6.

The food festival will feature local delicacies from all the states in the country. Norkiah and wives of other VIPs will be given the opportunity to participate in a cooking demonstration during the event.

“This is to inspire locals to promote the various delicacies in the country,” he added.

Aptly themed ‘Race to Harmony’, the regatta will be held from tomorrow to Sunday (Sept 8) at the Kuching Waterfront. Chief Minister Pehin Sri Abdul Taib Mahmud is expected to officiate at the opening ceremony on Sept 7.