Saturday, January 29
You are at:Home»News»Sabah»Talk on understanding culture via postcards 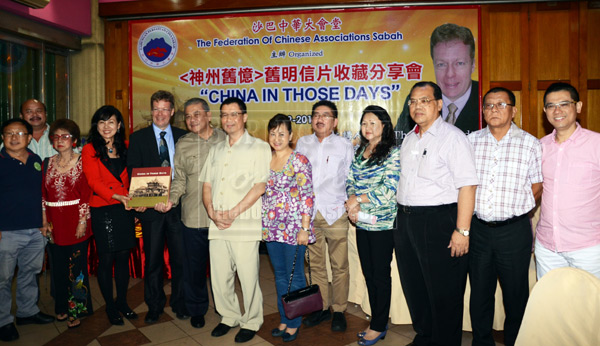 KOTA KINABALU: When was the last time you sent a postcard?

That was the first question popped by Thomas Brandt, general manager of the Malaysian-German Chamber of Commerce and Industry, who is also an avid postcard collector with an interest in history.

Back in the 1900s, where there were no mobile phones or Internet, postcards were a medium of communication.

In the early days, postcards were also a way to show off as one travels to other parts of the world, Brandt said in a talk organized by the Federation of Chinese Associations Sabah (FCAS) Cultural Session.

His talk was based on a book he has written, entitled ‘China in Those Days’, which provides insights into historical China through postcards of the time. Brandt himself has collected over 23,000 of China postcards, dating back between 1890 and 1900.

Brandt said the first postcard was invented in 1869 by Hermann, a Hungarian philatelist.

“In the year 1900 the postcard manufacturing industry in Germany alone produced 1 billion postcards annually. In August of the same year, an average of 1.5 million postcards per day was sent within the German territory.”

In 1876, China produced its first postcard and soon after the postcards allowed Europeans to understand the Chinese culture.

From then onwards, postcards have diversified into many types, among which are panorama and multi-view postcards, greeting-bearing postcards, postcard series, embroidered cards, art and college postcards, photographic cards, tiny postcards, humorous, satirical and political cards.

During his talk, Brandt showed up to 80 postcards of China from his collection and explained the history and significance of the postcards.

“This event is indeed a rare opportunity for us to gain an insight into the history and culture of China through these historical postcards,” she said.

Brandt is an economist for many years and has been actively providing consultation to small and medium-sized companies on market entry strategies into the Asian markets.

He also possesses extensive experience in the event and project management business, accumulated by years of assuming leading roles in a number of large projects, such as EU-Projects, Tehno German Exhibitions, managing entrepreneurial and high-ranking official delegations to many countries in the Asian region.

Besides that, Brandt is the chairman and founding member of EEGT, the Committee for ‘Environment, Energy and Green Technology’ of the European-Malaysian Chamber of Commerce and Industry (EUMCCI), and has organized various seminars, symposiums, conferences and exhibitions on renewable energy, biodiesel, biomass and green technology since 2004.

Brandt is a widely known author of four books, namely ‘Business in Indonesia – The Cultural Key to Success’, ‘AsiaComic’, ‘Asia in Those Days’ and his masterpiece ‘China in Those Days’.

“The book that Brandt is going to share with us today, ‘China in Those Days’, was written by him after seven years of research based on his valuable collection of China postcards,” Wong said.

Brandt’s visit to Sabah was also to promote the German beer festival.