Tuesday, December 7
You are at:Home»Features»All dolled up 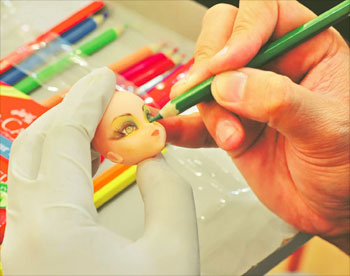 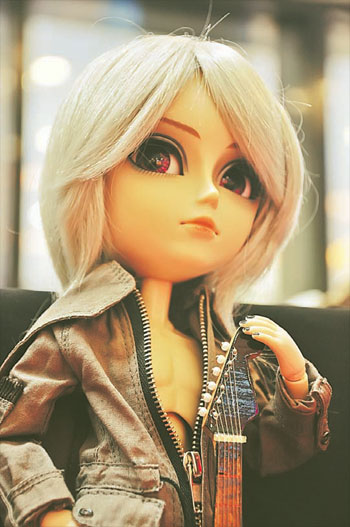 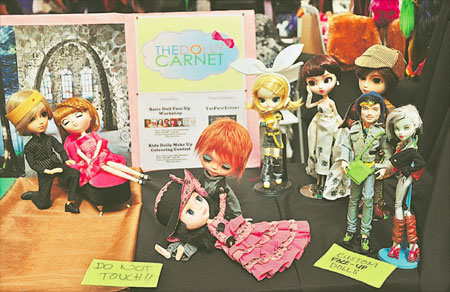 HEALTHY HOBBY: The Dolly Carnet brings doll enthusiasts and their collections together.

A LOVELY shade of eye shadow slowly appeared on the face as careful fi ngers expertly painted the area above the unmoving eyes.

Further works with brushes and pencils began to add colours and details.

Soon, the face was beautifully completed but the painted eyes remained unmoving and expressionless.

It was the face of an Obitsu doll head.

From a blank faceless canvas, it was transformed into an exquisite face fi t for a doll body of suitable size.

This transformation was seen at the Basic Doll Face-Up Workshop held in Plaza Merdeka during the annual anime, comics and games convention known as Kyanime Convention.

The workshop was organised by The Dolly Carnet (TDC), an informal group of doll enthusiasts based in Kuching.

Being the fi rst of its kind here, the workshop attracted a decent number of participants – from doll collectors to the curious alike.

Each was given a blank Obitsu doll head, colour pencils, brushes and a palette.

They were then guided through a demonstration before having to work their magic on the doll heads. 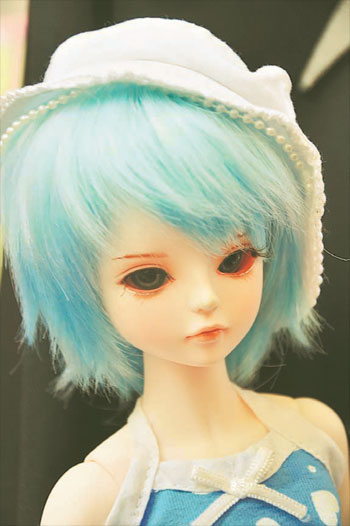 What exactly is a doll faceup?

According to one of TDC’s founding member, Jessica Lee, faceup is not just about makeup for a doll but also creating a desired look at one’s own will.

“If you are interested to faceup your doll, make sure you plan the faceup you want for your doll or you might end up re-doing it multiple times.

“Expenses for materials and tools should be considered because if you buy them blindly, you will end up spending on unnecessary items. Research is important to prevent messing the faceup or even the doll.

“Faceup can be time-consuming if not properly planned. Initially, there will be some errors but that is where you learn, as it is challenging,” she told thesundaypost.

In short, face-up is the general application of varied media to a doll’s facial surface to create various aesthetic effects similar to makeup for the human face.

On doll collecting, Jessica believed people’s perception plays a role in encouraging or discouraging the hobby.

“During the earlier days, doll collectors in Kuching were either children, usually girls, or those who still keep their childhood collections.

Most of them would just keep their hobby to themselves and did not bring their dolls out in public.

“People’s perception plays a big role partly because our community tend to think dolls are only for kids so when adults like us bring the dolls out, they would give us questioning looks,” she said.

“Pullip dolls and ball-jointed dolls are mostly available online but some are limited editions and hard to find. The prices for these dolls are high.

“For new collectors, it’s best to buy a full set doll that comes with wig, eyes, faceup, clothes and shoes. This works when you have no idea where to source for doll’s clothes, shoes, eyes and wigs or not knowing how to start a doll faceup.

“It’s advisable to spend time researching on the doll just like getting to know a person. All dolls are beautiful but it will be impulsive to buy out of passing interest and in the end, just sell them off or put them aside to collect dust.

All dolled up “Before I got my very fi rst doll in 2010, I questioned myself whether I really wanted to start this hobby after doing research for a month,” she revealed.

The Dolly Carnet was founded when four girls discovered they shared the same passion for doll collecting.

Syamim, who gave the group name, said when she fi rst started the hobby, the others already had blogs about their dolls.

“Siti already has a Facebook page for her ball-jointed doll Cloverina and Jessica has a blog on her dolls. Vela followed suit with sharing pictures of her dolls on Facebook.

“Because of that, I suggested we should start a doll blog to post our activities and pictures – which we did. Our doll blog was launched on January 16, 2012, after we held our very fi rst doll gathering in October 2011. Jessica and I are the main admins for the blog. Jessica also created TDC Facebook group,” she said.

From four core members, TDC has nearly 300 members in the Facebook group now.

“The numbers are growing daily and members are not only from Malaysia but also Japan, Korea, Indonesia, Thailand, the Philippines, the US, Russia and others. There are many international doll designers, artists and photographers who joined us.

“In addition to sharing pictures of our dolls, we also share various information about the hobby and help each other.

“Some members even develop their talents in the art of customising such as making new faceups, sewing doll clothes and such. This can actually generate income because many doll collectors worldwide are keen to collect customised products,” she enthused.

During the three-day Kyanime Convention, TDC booth attracted many curious mall-goers who stopped to admire and take photos of the pretty dolls.

Naturally, some reacted negatively, especially with the latest horror movie The Conjuring still fresh in their minds.

A doll collector John Ling Jing Dao was amused by the reactions towards his collection on display which included fi ve Little Apple dolls.

The unusual Little Apple dolls look eerie because of their incomplete faces.

They are dressed in exquisite fabric costumes together with a detachable apple on the palm of their hands.

Created by artist Ufuoma Yurei Urie, they look minimalist but at the same time, perfectly depict the essence of Japanese gothic fantasy.

Each has a unique background story.

“I see that the general public is still quite close-minded about doll collecting, thinking it as just child’s play.

“Some people have negative ideas about my dolls because they think they are haunted. There were people who came up to me and asked whether spirits would possess the dolls.

“There was a young mother with her family. When she saw my dolls, she immediately covered her child’s eyes and snapped at her husband don’t let our child see these foul-looking things – a reaction I thought was rather rude.

“There may be superstitions but we love our dolls just like how others love their plush toys and other collectibles. How would you like getting remarks that your prized collections are haunted or possessed?” quipped the 21-year-old student.

However, there were also positive feedback and reasonable questions from the public, especially those genuinely curious about dolls and doll collecting in general.

On the reaction of people close to him, John said they had been supportive of his hobby.

“My mother does not object as she believes it’s a healthy hobby. Better doll collecting than be involved in unhealthy activities.”

To learn more about the hobby of doll collecting, visit TDC blog (http://www. thedollycarnet.blogspot.com) or join their Facebook group (http://www.facebook.com/groups/TheDollyCarnet).