Thursday, February 2
You are at:Home»News»Sabah»Esscom, Esszone to be fully mobilised to boost security of 10 Sabah districts
For the freshest news, join The Borneo Post's Telegram Channel and The Borneo Post on Newswav. 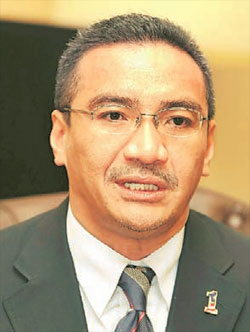 “I, myself, as Defence Minister, am not yet satisfi ed in terms of structure, coordination and planning to ensure Esscom and Esszone, which have the 10 districts under them, are fully mobilised.

“A sense of urgency must be injected among those responsible,” he told reporters after attending a Libaran Umno open house here today.

Towards this end, Hishammuddin said he would discuss the matter with the highest authority because the National Security Council headed by the prime minister had ordered Esscom and the agencies involved to submit the latest report on developments in the 10 districts.

He said structure and coordination which were required, involved equipment and personnel.

“Planning referred to cooperation among the public, village heads, community leaders, mosque committees and fishermen who were at the frontline of the defence with Rela, Civil Defence Department and other volunteers,” he added.

At the same time, Hishammuddin said the preparation of infrastructure and intelligence should be at a high level to prevent a recurrence of the intrusion at Kampung Tanduo in Felda Sahabat.

He said ‘Ops Sanggah’ at Felda Sahabat was still ongoing, with combat assets and two batalions of soldiers still stationed in the area, while ‘Ops Pasir’ was running as normal.

He said the process of setting up an infantry batallion camp in Kudat, Felda Sahabat, Lahad Datu and Semporna would be continued and an announcement would be made upon completion. — Bernama