Thursday, August 11
You are at:Home»News»Sarawak»SAPS will benefit the Malays in Satok, says Abg Jo 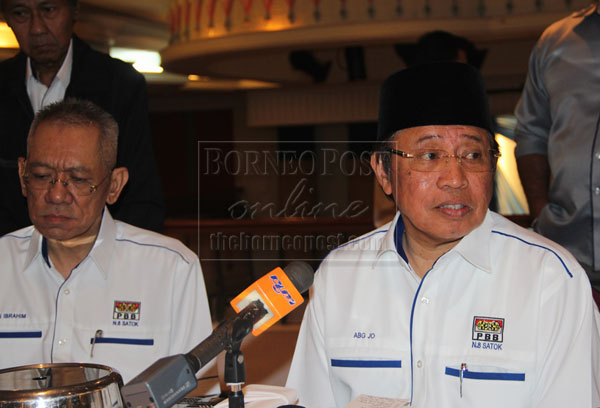 UPDATING THE MEDIA: Abang Johari (right) talking to members of the media at the press conference. At left is PBB Satok deputy chairman Ibrahim Baki

KUCHING: The interests of the Malay community in Satok will be better protected following the recent setting up of investment vehicle Syarikat Amanah Pelaburan Satok (SAPS), modelled after Singapore’s Malay Trust Fund.

Housing Minister and Satok assemblyman Datuk Amar Abang Johari Tun Openg said the initiative would enable the Malays in Satok to participate in development projects in the area, as well as ensuring properties owned by them stay within the community.

He said the SAPS, which started this month with RM1 million in capital through funds from him and Petra Jaya MP Datuk Fadillah Yusof, was set up to maintain the equity structure of the Malay community in Satok since it is in the middle of the city.

“I have studied what happened in other areas where properties changed hands as those areas become iconic and turned into business districts. The original owner or community affected cannot play their role in those areas.

“We target that in the next three years the funds in Syarikat Amanah Pelaburan Satok will reach RM5 million. With a RM5 million capital, we will work with financial bodies and institutions on the best way for us to take part in development in Satok, particularly Jalan Satok, Jalan Kulas and Jalan Haji Taha areas,” he told reporters after opening PBB Satok triennial general meeting yesterday.

Abang Johari said the investment vehicle had received good response from Malay intellectuals from the area.

“We have studied the success story of one organisation in Singapore – Malay Trust Fund in Singapore – that managed to oversee the Masjid Sultan area there. That is a good model, apart from Permodalan Nasional Berhad (PNB) and Lembaga Tabung Haji.

“I discussed it with PNB chairman Tun Ahmad Sarji (on the setting up of SAPS) and I also got advice from Chief Minister Pehin Sri Abdul Taib Mahmud. I hope PBB members in Satok would understand (the need for this investment vehicle).”

He hoped that SAPS would be emulated by Bumiputera communities in other areas, especially those which were now experiencing many property development projects.

“In fact, my friends in Tupong also have to do it in view of the fact that there is a lot development coming in to Matang.”

Earlier in his speech, he said people in Satok could take pride with the fact that it is a bustling business district with many banks and other financial institutions, as well as many Bumi-owned and run businesses.

He said he was happy to note that PBB had won in Petra Jaya during the May 5 general election and in Satok in the 10th state election in 2011.

“I know most of us are into Facebook, and read statuses of others who are online. Nothing wrong with that, but do take some time to read books which are informative and make reading a habit,” he said.