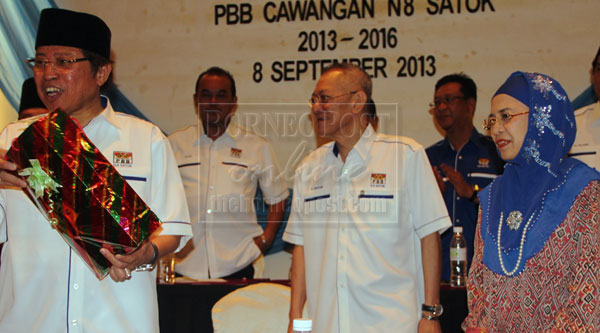 KUCHING: The allowances of all Muslim elected representatives in Sarawak have been deducted in order to raise seed money for the construction of a high-rise building in Jalan Haji Taha here.

He, however, did not say when the deductions started, but “a few million ringgit” had been raised.

“I must thank all the Muslim YBs who have contributed to Baitulmal. The funds (collected through these contributions) may also be used in other areas. Assuming that we want to re-develop Kampung Dato (a village in Sibu where 100 wooden houses were razed by fire on June 19, 2013), then we already have the funds,” he told reporters after opening PBB Satok triennial general meeting yesterday.

On the new building in Jalan Haji Taha, he said it would be sited where the now-demolished Binamara Building used to be located, behind the State Museum.

“I have been discussing with Baitulmal and Hikmah (Harakah Islamiah Sarawak) to get the project started, and the chief minister is aware of this.

“It will be completed within three years,” he said, without revealing the project cost.

He clarified that the project had nothing to do with the newly set up Syarikat Amanah Pelaburan Satok even though it is located within Satok state constituency.

Meanwhile, in his speech, Abang Johari visualised the proposed project to be a ‘pencakar langit’ (high rise building), where there will be commercial space for small traders.

He said locals in Satok would be encouraged to set up outlets in this new building to start or expand their businesses.

Previous ArticleSAPS will benefit the Malays in Satok, says Abg Jo
Next Article PBB all out to recruit youth members