Monday, September 26
You are at:Home»News»Sarawak»Stretch your imagination: From Kuching Waterfront to Petanak 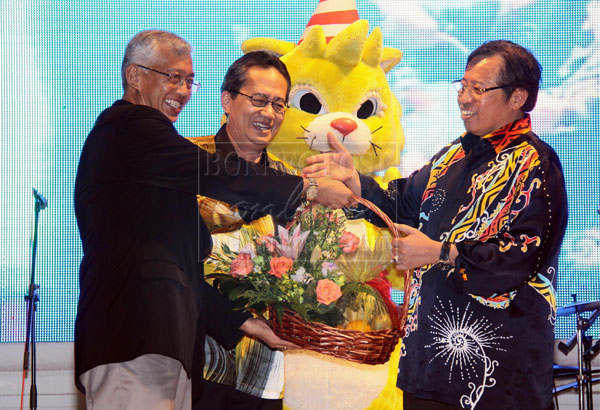 KUCHING: The state government is mulling plans to extend the current Kuching Waterfront from its current location up to the Petanak riverbank.

According to Tourism Minister Datuk Amar Abang Johari Tun Openg, the project is meant to beautify the whole waterfront stretch with tourism attractions for wider appeal.

“However, it is still in planning stages and we welcome input from the public on this whole project, such as how it should and can be done,” said Johari.

He was speaking at the Grand Finale 2013 Concert which marked the closing of the Pesta Kuching 2013 at the Amphitheatre in Jalan Budaya on Saturday night.

Earlier on at the event, Johari in his speech said response especially from foreigners on Kuching has been very overwhelming as its attraction and the friendliness of its citizens have overall shaped the city’s image as a liveable city with unique attractions.

“Kuching is a good role model for other cities in other countries as its image as a ‘City with a Soul’ has definitely opened the eyes of others on how a city should be,” said Johari.

Events such as the Pesta Kuching, the Sarawak Regatta and even the International Orchid Show is on path for outsiders to visit the city and learn during their stay what this city has to offer,” he added.

He said the state government is also looking at creating various new attractions such as developing the Legacy Square located between the current Sarawak Museum up to the old State Legislative Complex (DUN), which will be connected via a pedestrian bridge, crossing over the Sarawak River.

“However, we are also studying other inputs especially by the citizens itself, such as the issues on traffic. With a proper plan, Kuching will turn not only into a friendly city in all aspects, but also in terms of physical development, landscape but solving issues regarding traffic and housing matters.

Among the highlights of the event were the performance by popular artis Hafiz AF7 and fireworks and laser show.

Previous ArticlePeace enjoyed by M’sia must be maintained — Anifah
Next Article SAPS will benefit the Malays in Satok, says Abg Jo