Monday, February 17
You are at:Home»News»Sarawak»Ewon: Sarawak can be major player in science, technology 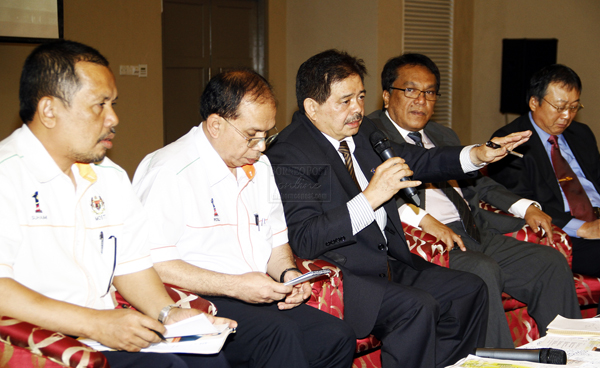 WE ARE SERIOUS ABOUT IT: Ewon (centre) answering queries from the floor during the dialogue session. — Photo by Chimon Upon

KOTA SAMARAHAN: Sarawak has great potential to be one of the major players in the development of science and technology in the country.

In saying this, Minister of Science, Technology and Innovation Datuk Dr Ewon Ebin explained this was because the state was rich in natural resources which would be crucial to the ministry’s (Mosti) programmes.

“One of the biggest potential in Sarawak is the development of renewable energy and via my discussion with the Chief Minister on Thursday, I know that the state government is very serious about it,” he said.

He said this in his opening address during a dialogue session with the recipients and applicants of Mosti grants for Sarawak at Universiti Malaysia Sarawak (Unimas) near here yesterday.

Apart from renewable energy, he said, another area that could also be explored was the state’s marine resources and for this, his ministry had implemented a few projects that were expected to add value to the aquaculture and bio-economy in the state.

“Among them is the development of the Empurau Resource Centre in collaboration with Indigenous Fish Research and Production Centre (IFRPC) Sarawak. Another project involved Unimas – a pilot project to scale high speed fermentation of ethanol for fuel from sago utilising the Ishizaki process – it has successfully opened up a new field that promises good returns from the waste of sago processing.

“Apart from that, Unimas is also involved in other projects including isolation and characterisation of ADH gene and applications of genomics to acacia mangium plus trees (super bulk) and acacia hybrid trees for better wood quality,” he added.

This year, Mosti was focusing on six bio-economy projects in the state with two being carried out by Sarawak Biodiversity Centre and the remaining involving Biotech Alliance International Sdn Bhd, Sirim, Biotechnology Diversified Industries Sdn Bhd and CMS Agrotech Sdn Bhd, he noted.

“If all these projects are fully implemented, they are expected to generate RM887.4 million to the national gross income by year 2020,” Dr Ewon pointed out.

Under the 9th Malaysia Plan (9MP), Mosti approved 95 projects, mostly related to research and development (R&D) involving total grants of RM44.14 million with 39 projects being carried out by Unimas at a cost of RM6.25 million, he elaborated.

“Under the 10MP, 15 projects costing RM2.32 million had been approved in Sarawak out of which six projects were approved for Unimas involving a total allocation of RM1.12 million,” he added.

He also highlighted that the ministry had launched a series of programmes to promote a culture of science, technology and innovation throughout the nation including Sarawak.

For this year, they have identified eight programmes to be launched in the state and from February until this month, seven have been carried out such as an intellectual property workshop, a Myideas workshop, Excellent Shoot, Training of Trainers, Science4U Carnival, Chemical Go Rural and Sarawak Science Village while a debate competition on the safety of ICT will be held from Sept 26 to 27.

Previous ArticleA friend like no other
Next Article Focus more on fields with potential, UMS tells researchers