Wednesday, May 18
You are at:Home»News»Sarawak»WWII shipwrecks stripped 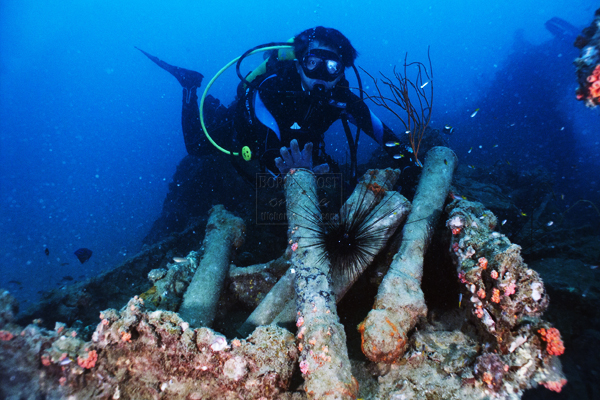 TOURISM POTENTIAL: A diver takes a closer look at WWII artillery shells located on the shipwreck of the Katori Maru, off the coast of Santubong in Kuching. — Photo by Ernest Teo/Premier Marine & Scuba Centre 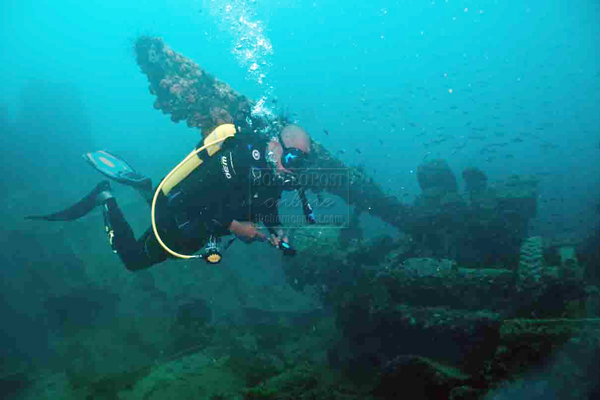 HISTORICAL SITE: A diver pauses to check his equipment next to what is possibly a ship mast while diving at the shipwreck of Japanese WWII ship Hiyoshi Maru. (Photos by Ernest Teo/Premier Marine & Scuba Centre) 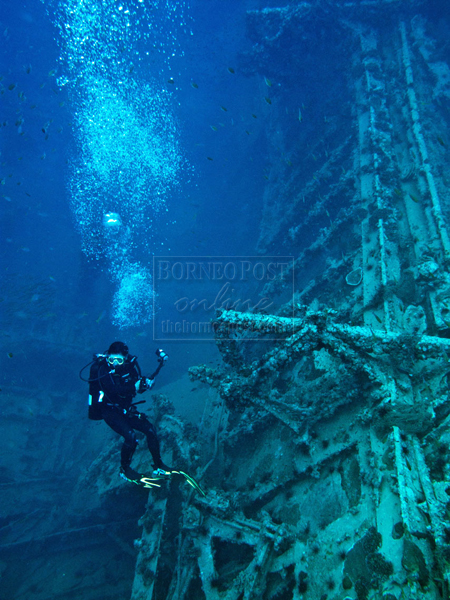 LIVING MUSEUM: A diver surveys the historical shipwreck of Japanese WWII ship Hiyoshi Maru off the coast of Santubong.

No law on removing artifacts from shipwrecks, divers plunder sunken ships with impunity

KUCHING: Divers have plundered the wrecks of two Japanese WWII war ships – the Katori Maru and Hiyoshi Maru – off the coast of Santubong over the years stripping them of artifacts or movable parts.

Scuba instructor Ernest Teo who brought this sad state of affairs to The Borneo Post yesterday said lack of legislation and policies are putting local dive sites at grave risk of losing their historical, cultural and tourism significance.

“For example, on the Hiyoshi Maru, there used to be a lot of things there that could identify it as a Japanese ship. But if you go there today, you can’t identify anything at all.

“I have heard [certain people]say they have hundreds of sake (traditional Japanese wine) bottles at home, as well as other items, like the propeller and so on.”

Teo, who has been organising diving trips to the wrecks for locals and tourists for the past nine years, highlighted that currently there is no law to stop people from removing items from these sunken ships, which he called “living museums”.

The Katori Maru and Hiyoshi Maru lie in relatively shallow waters, which makes them easily accessible to divers, including beginners. While their ease of access is one reason for their attractiveness as dive sites, it also makes them especially vulnerable to vandalism and theft.

A third shipwreck – a Japanese WWII destroyer called Sagiri – is relatively untouched as it is less accessible compared to the other two ships, requiring
higher level diving skills and experience.

Aside from destroying the historical value of these sites, the removal of artifacts from shipwrecks will also cause a significant negative impact on underwater tourism in the state.

“They are stripping everything off and making it not interesting at all.

“There’s one wreck where you can still see torpedoes, bombs and a lot of other things. These are the things which are attractive [to visitors].

“If we can keep it attractive, we can bring tourists to Kuching but we have a long way to go,” Teo said.

Local interest in scuba diving as a leisure activity has shot up in recent years. Teo gave a conservative estimate of approximately 50 to 70 new divers every year.

Teo pointed out that while some members of the diving community are putting in their own resources and time to initiate research and collect information on these historical dive sites, the government, the media and the public must support their efforts.

Among the safeguards which could be implemented, Teo suggested was restricting the movement of fishing trawlers near wreck sites as well as requiring permits for boats to enter the areas.

He also advocated setting up a community-based management system where local villagers, boatmen and divers can assist various government agencies to record and monitor diving activity and the presence of boats near historical dive sites.

Public awareness programmes to help educate residents of nearby villages on various penalties and guidelines pertaining to protecting historical dive sites would also be helpful.