Wednesday, January 19
You are at:Home»News»Sabah»PAS to bring Sabah land issues to government 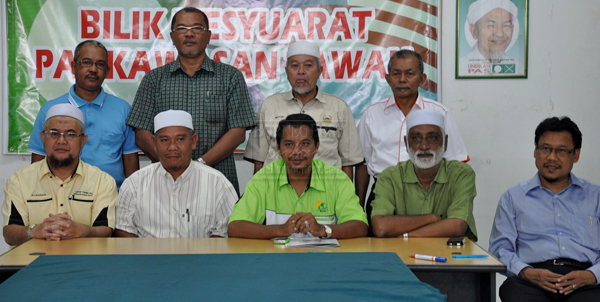 TAWAU: Parti Islam SeMalaysia (PAS) will bring up land issues which it deems very critical by pressuring the government to be more committed to address them.

PAS Land Development Bureau chief Mazlan Aliman said the issues if not addressed would be brought up to international attention and the court.

Mazalan, who was on a working visit here, said his team was gathering information from the affected people in Sabah and the land cases would be compiled and studied by a lawyer and would be submitted to the court by the end of this year.

“The bureau was established to handle issues involving land matters whether under land agencies such as FELDA, FELCRA and others such as customary land that had become controversial,” he said yesterday.

Mazalan said he had visited Pulau Gaya, Keningau, Sook, Nabawan and Kalabakan and had seen the community living there and was sad to see how Sabah, which is part of Malaysia, and its people’s sacrifices when forming Malaysia on September 16, 1963, did not enjoy the level of development parallel to the country’s.

“Fairness did not happen. Poor, basic infrastructures lacking, in other words Sabah has been left behind,” he said.

He said it was not logical when compared to West Malaysia where the main road from Keningau to Tawau still had about 50 kilometers unsealed which could not be accepted considering the amount of allocation allocated by the federal government to build the road.

“The Keningau/Tawau Road is a main road, not an interior road,” he said.

He added it was also sad to see hundreds of hectares of logged lands along the Keningau/Tawau Road not developed and left barren.

“Nothing is being done to replace the logged timbers which could be used for the development of new villages or schemes,” he said.

Mazlan, who is also the ANAK president, also said he could not understand why Pulau Gaya which is about 15 minutes’ boat ride could not be developed and the people there lag behind in development.

“We are celebrating Malaysia Day, but it is sad to see not much changes have happened,” he said.

“We want to gather again all the ethnic representatives with land issues. This is our commitment, so the issue on Sabah lands will be brought up at national level, and if not addressed we will bring it up to the international level,” he said giving example of the RAPID KL issue where a foreign investor had pulled out.

Meanwhile, lawyer Harris Abdullah said he had received complaints of lands that were already applied by villagers but were seized and given to companies from West Malaysia.

“I will study the issues and I have many lawyer friends in Sabah, where we will bring the issues to court as a test case. The land issues in Sabah are very interesting and we are gathering information on the cases and will bring them to court by the end of the year,” he said.