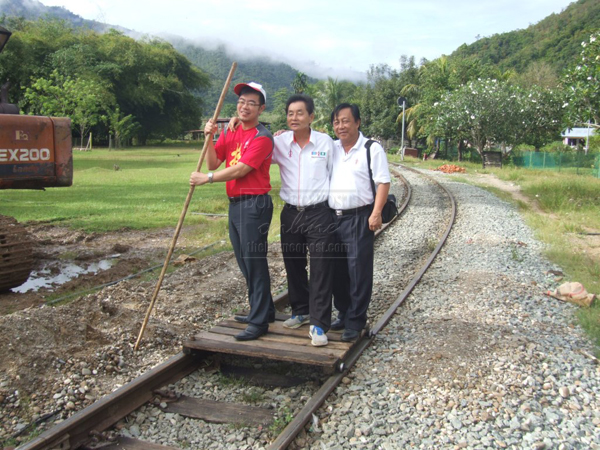 TENOM: The residents of three villages in Pangi, Tenom, namely, Pangi Sebrang, Pangi Station and Pangi Kalambos where the hydro-electricity plant is sited, located some 11 kilometres from Tenom town, are begging the government for assistance to provide a special train service for them, according to DAP Sabah.

As there are no roads linking Pangi to Tenom and due to the limited train service, the villagers have taken the initiative to build makeshift “rail trolleys” to make their way to Tenom and back. This mode of transportation is considered illegal but, for want of a better alternative, has been tolerated with “one eye closed” by the State Railway Department.

The train service will take about 30 minutes while the ‘rail trolley’ will take about two hours for a one-way trip. The rail trolley, while considered dangerous and risky, has been a life-saver many a times for the Pangi inhabitants when they fall sick at a time when there is no train service. This apparently is also how they transport their agriculture produce to the market in town and spared from extra cost when using the train.

The villagers are hoping the government will be able to provide them with motorised trolleys so that they can travel faster, especially when bringing sick villagers to the Tenom hospital.

A team of DAP Sabah leaders learned of this ‘rail trolley’ service during their visit to Pangi on September 7, this year.

Some 500 people, predominantly Muruts, are living in Pangi. They depend on rubber and fishing as their main source of income. They have cultivated about 30 acres of rubber trees, mainly in Kampung Pangi Sebrang, which is on the other side of the river. The villagers here are concerned as the lands that they are now toiling are still untitled or under Land Application (LA) status. Jimmy Wong, who is also member of parliament for Kota Kinabalu, has advised them to apply and place a claim on the land as native customary rights (NCR) land.

In Pangi, the people do not have clean treated water only gravity water. Only Kampung Pangi Sebrang is not provided with electricity despite the fact that the hydro-electric dam is just around the corner.

There is a government school that teaches up to primary six with 105 students and it was surprising to note that many of the students are from Tenom and had to depend on the train service.

The Padas river is now famous for its tourism attraction of white water rafting with five companies having established their business operation at Pangi employing about 30 local river guides. The DAP leaders, while acknowledging the huge tourism potential in Pangi, were however shocked to learn that tourists going for white water rafting would have to sit on top of the train because of limited space in the coach. Jimmy said he hopes Minister of Tourism Datuk Masidi Manjun will find time to visit Pangi to address this problem to avoid any untoward incidents that could tarnish the good standing of the industry.