Friday, June 25
You are at:Home»News»Sarawak»Farewell to the Crown Prince 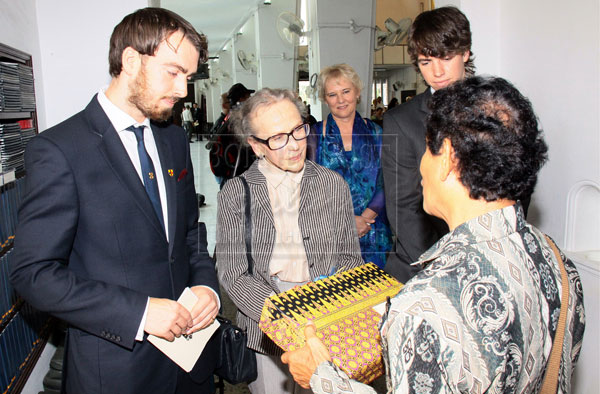 KUCHING: A chapter in the state’s history came to a close when the ashes of Anthony Walter Dayrell Brooke, the last Rajah Muda (Crown Prince) of Sarawak, were buried at the Brookes’ Graveyard near Fort Margherita here yesterday.

Anthony Brooke who would have become the fourth Rajah of Sarawak if his uncle Sir Vyner Brooke the third white Rajah had not ceded the state to the British Colonial Office in 1946, had expressed his wish for his ashes to be interred in Sarawak soil.

Anthony, the son of Betram Brooke, the brother of Vyner and Gladys Palmer, was born on 10 December 1912.

He grew up in England and after graduating from Cambridge was posted to Sarawak to serve in the civil service of the Brooke Raj.

On August 25 1937, he was installed the Rajah Muda of Sarawak and granted the personal style of His Highness because Vyner had three daughters but no son and Sarawak’s law then did not allow a woman to be the ruler.

He served in various departments in the civil service including the Land and Registry Office and as a magistrate.

Anthony opposed the cession of Sarawak to the British a stand that was backed by the Malays who were close to the Brookes.

The anti-cession movement came to head in 1948 when the second British governor to Sarawak, Sir Duncan Stewart, was assassinated by a young nationalist Rosli Dhoby in Sibu.

Suspicion fell on Anthony that he orchestrated the killing of the governor but declassified documents from the British National Archive later showed that he had no connection to the plot.

In 1951 Anthony finally renounced his claim to Sarawak’s throne and lived out the later part of his life in New Zealand where he died at the age of 98 on March 2, 2011.

The date of his death was a poignant coincidence as two Sarawak Anti Cession members, Rosli Dhoby and Awang Ramli Amit, were hung on the same date in 1950.

Anthony Brooke dedicated much of his life to promoting world peace and was the founder of Operation Peace Through Unity (OPTU) in 1975.

Significantly yesterday, the day his ashes were buried, was the International Day of Peace. It symbolised the lifelong work of peace that Anthony was known to promote in his lifetime.

A final public memorial service, led by Archbishop of Southeast Asia and Bishop of Kuching Datuk Bolly Lapok, was held at St Thomas Cathedral before the burial ceremony.

During the memorial service, Anthony’s wife, Gita, paid tribute to her late husband and his contributions to a peaceful community.

“I trust that his ashes will continue to remind us of the fire and spirit of the gentle man who embraced all people he met and whose enthusiasm would leave no one untouched.

“We may recall the man of peace, who stood clear, strong and steadfast on the principles he firmly believed we could and would build a better and fairer world.

“Despite increasing frailty through the last years of his life, Anthony’s focus would still be fixed on the foremost aim and vision of his entire life. The very last message he struggled to write down in a sentence, but unable to finish, carries a clear message:  “Never before have the problems in the world presented individuals with a greater challenge to participate in helping find a solution…”

“Had he been able to complete the sentence, it would have been continued by pointing out the tremendous opportunity to work together for the common good, thereby heal all relationships.

“Let us respond to his last and urgent appeal and turn this challenge into the unprecedented opportunity for us not only to find the solution but become the solution,” she said.

Their grandson, Jason Brooke, expressed his hope that an enduring spiritual connection between the Brooke family and the people of Sarawak would continue to exist just as his grandfather had believed.

“The Sarawak of today may have changed on the surface, but in spirit it appears unchanged. Everywhere, on my own and my family’s visits to the state, we are met with warmth and welcome, and we see in the many faces of Sarawak, a vision of harmony between people of various faiths, backgrounds and beliefs.

“This day would have meant a great deal to my grandfather, the quiet gesture from all who are here, to witness the end of what had been a remarkable journey,” he said in his tribute speech.

Previous ArticleArmy, Home Ministry to expose those who want Sabah to secede
Next Article Transfer of personnel will yield professional growth