Wednesday, July 8
You are at:Home» 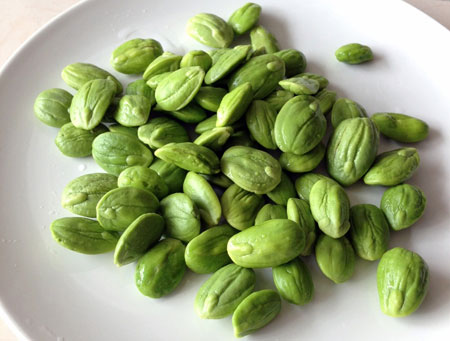 A FEW weeks ago, I wrote about durian, the king of fruits, so it is only natural that I give recognition to its distant cousin, the equally potent petai.

There is no denying that petai (scientific name: parkia speciosa) is an acquired taste. Also known as stink beans, as the name aptly implies, the stink can be so pervasive that after ingestion, you will emit a strong odor characteristic of the bean.

Especially telling is the smell of your urine due to the chemical compounds in petai, and this smell can persist for up to two or three days after consumption – not that this is a deterrent for petai lovers, I believe.

Petai, which belongs to the legume family, is harvested from tall rainforest trees that can grow anywhere between 15 metres and 45 metres in height. These trees are found in tropical regions like Malaysia, Indonesia, Thailand, and the Philippines.

Long green pods, where its seeds/beans reside within, hang in clusters at the tip of the branches. Petai beans can be eaten raw in ulam (traditional Malay salad), or cooked (sambal petai being a perennial favourite) and is a widely used culinary ingredient in South East Asia.

Petai is rich in plant protein and essential amino acids, which are building blocks of protein to ensure the proper functioning of the central nervous system.

It is a good source of minerals, and is especially high in calcium, phosphorus, potassium, and iron. Petai is high in fibre, and contains considerable amounts of vitamin C and E, as well as the vitamins A, B1, B2, and B3. This makes petai one of the most nutritious local vegetables.

Barring the smell, the good news is that petai has significant health benefits and has been used in folk medicine to treat diabetes, hypertension, liver disease and kidney disorders. Petai is also purportedly effective in expelling intestinal worms and parasites.

Petai contains powerful antioxidants that can effectively scavenge harmful radicals and protect the cells from damage.

Antioxidants help to prevent oxidative stress that is the cause of many illnesses, including degenerative diseases like diabetes, hypertension, arthritis and cancer.

Numerous studies have been done to establish the antioxidant nature of petai. A high content of Vitamin C and a considerable amount of vitamin E are major compounds found in the bean contributing to its antioxidant capacity.

The beans were also found to show high amounts of phenolic compounds. Phenols act as antioxidants while exhibiting powerful antiseptic and antibacterial properties.

Perhaps one of the most significant benefits of petai is its medicinal property in the treatment of diabetes.

Studies have also found that the hypoglycemic effect of petai is attributed to two major plant sterols present in the beans and pods, working synergistically to produce the anti-diabetic effect.

Plant sterols have been proven to significantly lower LDL cholesterol levels, thus helping to reduce the risk of stroke and heart disease.

Petai, being a high sterol food, naturally contains a high amount of dietary fibre to prevent constipation and keep the digestive system healthy.

Dietary fibre slows down glucose absorption from the intestines, and prevents a rapid rise in blood insulin levels. This too benefits diabetics as well as people who are fighting obesity.

Thiazolidine-4-carboxylic acid, also known as thioproline, is an amino acid that gives petai its sulphur smell. It is an effective nitrite-trapping agent in the body. Nitrites are commonly used in the food industry for curing meat.

Thioproline acts as a nitrite scavenger and has been tested effective as an anti-cancer agent. It is also interesting to note that the amount of thioproline in petai beans while undetected in its raw form, increased markedly after boiling (Suvachittanont et al., 1996).

Caryophyllene and Lupeol are two other compounds found in petai bean extract that have been reported to have anti-cancer properties (Salman et al., 2006).

Lupeol was also found to possess anti-inflammatory and anti-arthritic effects.

Petai is traditionally believed to have a blood cleansing and body detoxifying effect.

The liver is responsible for filtering out toxins from the blood, and thioproline, the same anti-cancer agent mentioned above, stimulates detoxification in the liver and helps protect the liver from damage, caused by various toxins like alcohol and paracetamol overdose.

Cyclic polysulphides, one of the major compounds in petai, responsible for the pungent flavour of the petai, have shown to exhibit antibacterial and antifungal properties.

For this reason, petai is used in traditional medicine for the treatment of kidney inflammation which is caused by bacterial activity in the kidney (e.g. E-coli). Petai is also a remedy used for infections of the ureter and urinary bladder.

It is advisable to drink plenty of water to reduce the accumulation of djenkolic acid in the body.

There is no scientific data on the purine levels of petai. However, it can be assumed that like any legume, it may contain moderate to high levels of purine. Foods high in purine can raise uric acid levels; hence people who are susceptible to gout should consume petai in moderation.

While petai has an anti-bacterial and anti-inflammatory effect on the kidney, consumption of petai may need to be limited for patients with kidney disease since legumes like petai are high in protein, potassium and phosphorus, all of which affects kidney function in people with kidney disease.

Knowing the health benefits associated with the petai will enable us to fully appreciate this local produce and acknowledge that nature is still the perfect source for health.

Previous ArticleTackling mental health issues
Next Article Why isn’t marriage the way I thought it would be?