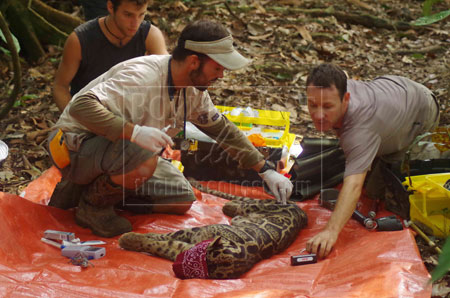 KINABATANGAN: A wild Sunda clouded leopard was recently trapped and fitted with a satellite collar for the first time ever, as part of a collaborative project between the Sabah Wildlife Department (SWD), WildCRU and the Danau Girang Field Centre (DGFC).

This project, focusing on research and conservation of the Sunda clouded leopard and other carnivores in Sabah, is mainly funded by Sime Darby Foundation, with additional funding and support provided by Atlanta Zoo, Houston Zoo, Recanati-kaplan Foundation, Robertson Foundation, Point Defiance Zoo and Rufford Foundation.

“On Sunday 15 September, early morning, a male Sunda clouded leopard weighing 25 kgs, was caught in one of our traps set up along the Kinabatangan River, in the vicinity of DGFC,” explained Andrew Hearn from WildCRU and PhD student at Oxford University.

“Rarely seen, Sunda clouded leopards are amongst some of the most elusive and secretive of the world’s wild cats, and as such, remain one of the least understood.

“I have been studying these beautiful felids here in Sabah for over seven years, yet have seen them only a handful of times, and despite trying, have been unable to entice one into our traps, until now,” he said.

Hearn added the leopard was fitted with a satellite collar to provide crucial information on its movements in the Kinabatangan landscape.

“It should send a location every 20 minutes for about four to six months, enabling us to determine its home range and how it is able to move through the fragmented landscape.

“Incredibly, a few days later, we caught another individual, an old female, weighing only 9 kgs. She was too small and too old to collar, but we have been documenting her in the Kinabatangan since 2010, using camera traps,” said Hearn.

Wildlife veterinarian Dr Fernando Nájera said anesthetizing the first wild male Sunda clouded leopard had been one of the most rewarding experiences of his whole professional career.

“We have been waiting too long for this moment and having this astonishing animal under my care during the procedure was something that I will never forget.

“Malaysians are very lucky to have this unique species in their forests and we all need to keep on working together towards the conservation of Sunda clouded leopards, a truly Malay treasure,” said the PhD student from University Complutense of Madrid, Spain who is working on the project.

Dr Benoit Goossens, Director of DGFC and researcher at Cardiff University, pointed out the collaring of this male is part of an intensive satellite tracking programme to study the spatial ecology and habitat associations of the Sunda clouded leopard and other sympatric carnivores in the fragmented landscape of the Lower Kinabatangan, dominated by palm oil plantations and highly degraded forest.

“We are able to carry out this research thanks to a major donation (RM1.46 million) from the Sime Darby Foundation, as part of their Big 9 scheme. Without the support of the Foundation and our other partners, we would not be able to carry out such crucial work to help understanding the ecological needs of the Sunda clouded leopard and transform this information into conservation policy,” added Goossens who is leading the programme.

Datuk Dr Laurentius Ambu, director of the Sabah Wildlife Department and co-leader of the programme, disclosed that one of the major outputs of this long-term research programme on the Sunda clouded leopard would be the production of a State Action Plan for the species.