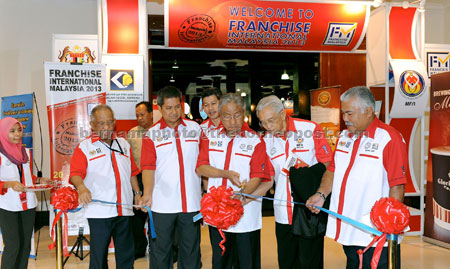 KUALA LUMPUR: Local franchise brands have a big potential in exploring the international market in view of the fact that there are now 49 of them in 51 countries and having established almost 1,500 branches.

As such, he urged local entrepreneurs to redouble their efforts to explore international markets to expand local brands and make Malaysia the franchise hub for South East Asia by 2020.

“We want Malaysian franchise brands to not just succeed at the local level but also in the internationalisation programme through the various franchises we have developed,” he said.

“This prospect (international market)is large enough to be explored by Malaysian franchises to further expand their business and at the same time, stamp the country’s name on the global stage,” Hassan said.

Meanwhile, Mohd Latip said the MFA had target franchise transactions of RM370 million at the FIM 2013, which also has the participation of the World Franchise Council (WFC) and the Asia Pacific Franchise Council(APFC).

He also said the franchise business was one effective way of assisting the country’s economy.

“Apart from assisting in developing the local franchise industry, the MFA also welcomes overseas franchisers to offer their business concepts to Malaysians in search of new, attractive and innovative franchises,” he added.

The three-day FIM 2013 which began on September 20 has this time has the participation of 110 local and overseas franchise companies.

Among the overseas companies are those from the United States, South Korea, Canada, Australia, Indonesia and Hong Kong. — Bernama