Saturday, August 8
You are at:Home»News»Sarawak»‘FoSM to play role in culture preservation’ 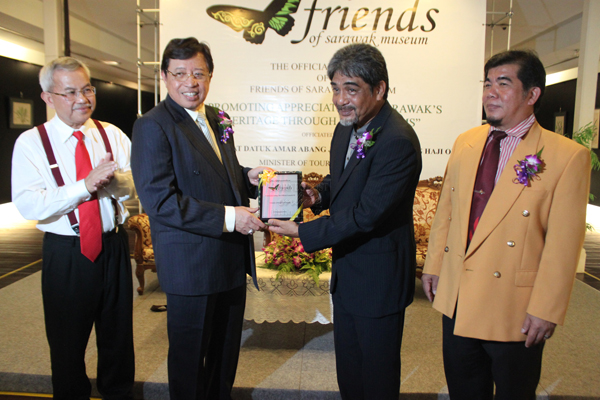 APPRECIATION: Anthony (second right) presenting Abang Johari with a token of appreciation. Looking on are Talib (left) and Ipoi.

KUCHING: Friends of Sarawak Museum (FoSM) has come at the right time to play a role in the state government’s massive cultural and heritage preservation exercise, which involves the construction of a new museum.

Speaking at the official launch of FoSM yesterday, Tourism Minister Datuk Amar Abang Johari Tun Openg said they will be talking to experts, including one from Singapore, to get their input on a new museum building to facilitate the exchange of artefacts with other museums in New Zealand, Australia and Europe.

He also said the new museum is part of the plans for a Legacy Square announced by Chief Minister Pehin Sri Abdul Taib Mahmud in August.

“Sarawak has a rich historical, natural and cultural heritage – from our music, dance, language and costumes to our natural resources and our food. This rich heritage has drawn traders, thinkers and travellers from all corners of the world to our shores.”

FoSM is on a mission to promote appreciation of Sarawak’s heritage through its museums, providing an opportunity for Sarawakians from all walks of life to contribute to museums and other heritage sites.

“It will train docents, or volunteer guides, to provide quality interpretation to visitors,” Abang Johari said.

In his speech, Ipoi Datan said the Museum Department’s vision is to become a world class heritage institution of Sarawak.

“We aim to be the custodians of antiques, monuments and cultural landmarks, archaeological sites, arts, architectural, religions relics and other materials which have high traditional significance and value for the benefit of the state and national heritage in order to bring about perpetual understanding and greater harmony amongst the people of Sarawak.”

In order to achieve this vision, he said they were working closely with counterparts in the government, institutions and experts from around the world and partners in the private sector.

“The ‘Friends of the Museum’ organisations exist in many parts of the world, and have proved to be an invaluable resource for museum administrators and managers,” he added.

FoSM was registered in September 2012. Its mission is to promote the appreciation of Sarawak’s heritage through its museums.

Their activities are broken down into three areas – to promote the role of museums in Sarawak, to provide a way for interested people to get involved in museums, and to provide quality interpretation of museums

It is a civil society organisation that forms a bridge between ordinary people and a museum. It gives the public an avenue to participate in the workings of a museum.

“We believe it also strengthens a museum. In order to do this, we need to work closely with the museum itself. Together, we are sure we can make Sarawak’s museums great attractions in Sarawak, for ourselves and for those who visit us,” Anthony said.

Those interested to become members of FoSM will need to pay an annual membership fee of RM80, and a one-time administrative payment of RM10. There are different categories of membership.