Friday, June 25
You are at:Home»News»Sarawak»Penan longhouse in Murum burnt down, arson suspected 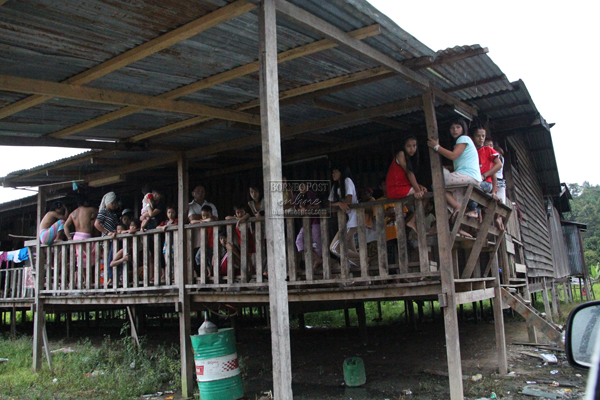 BURNT DOWN: File photo of Long Wat taken a few months before the community moved to Tegulang.

KUCHING: The longhouse at the former Long Wat settlement, about 4 hours from the Murum HEP dam site, was reportedly set on fire by persons unknown over the weekend.

The suspected act of arson was discovered by villagers who had returned to the settlement to collect their belongings and livestock to take with them to their new homes at Tegulang, according to Sarawak Conservation Alliance of Natural Environment (SCANE) chairman Raymond Abin who received the news from the villagers yesterday afternoon.

“When they went there, they were shocked to see their longhouse set on fire by someone. They are not sure who were the culprits,” he said, explaining they had returned to the site because they had not managed to take all their property with them to the new site during the move to Tegulang two weeks ago.

“Basically they have moved, but they still have their property and livestock left behind because when they moved, it was rushed. According to them, a lot of them had to move in the evening when it was already dark so everything was rushed,” he told The Borneo Post yesterday.

He was informed by the villagers that the fire affected the whole longhouse structure but the full extent of the damage has yet to be ascertained.

He added that the villagers suspected that the fire could have been set on last Saturday which coincidentally was also the day that impoundment of the dam had begun.

In addition to the fire, a number of boats and engines owned by the Long Wat Penans have also been damaged by rising water levels resulting from the impoundment.

Raymond said that the Penans told him they were not informed ahead of time about the impoundment.

When contacted separately, SAVE Rivers secretary Mark Bujang told The Borneo Post that the villagers are considering filing police reports over the unannounced dam impoundment and over the longhouse fire.

“If they have received compensation that has been agreed to and there is no one left in that area, of course the land doesn’t belong to them. But as for the building material of the longhouse, they still have the right to take it to their new place as it still belongs to them.”

SAVE Rivers Network chairman Peter Kallang told The Borneo Post that they had received information that there are currently about 100 protestors at the dam site.

When contacted, Belaga police chief DSP Bakar Sebau said that they have yet to receive any report of the purported fire at Long Wat but promised to investigate.

“We have to check as the site is quite far away, four hours drive from here,” he told The Borneo Post when contacted yesterday afternoon.

Meanwhile, he declined to comment on the ongoing blockade at the dam site, other than to confirm that negotiations between the protestors and representatives from the Belaga District Office, State Planning Unit and Sarawak Evergy Berhad are scheduled for today.

He estimates that there are currently about 60 protestors comprising villagers from Long Tangau, Long Luar, Long Singu, and Long Menapa.

The 89 families of Long Wat are the first batch who have moved out of their villages to new resettlements. About 264 families from six Penan villages and one Kenyah village have yet to relocate.