Friday, August 7
You are at:Home»News»Sarawak»Abg Jo: Experts from NZ to conduct study on eco-tourism 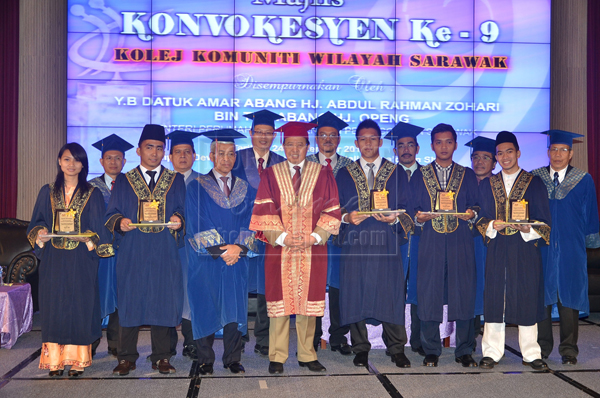 A MOMENT TO REMEMBER: Abang Johari (fourth left) and Amir (third left) in a photo call with some of the graduates.

KUCHING: The state has engaged New Zealand eco-tourism experts to do a comprehensive feasibility study on its tourism sector, particularly in eco-tourism.

The study will cover areas from the Santubong peninsula to Tanjung Datu, including Bako National Park and Wetland Park, and Rambungan to Lundu which has Gunung Gading Park and Tanjung Datu Park.

Minister of Tourism Datuk Amar Abang Johari Tun Openg said these places are easily accessible from Kuching, which made them popular among tourists.

He said the study would include accommodation which must blend with the environment.

“The study, which is costing more than a million ringgit, is now in process and we are giving them a timeline of one year. After that we will know what infrastructure to put in.

“The New Zealanders are good in eco-tourism because in their country, eco-tourism is number one followed by agriculture,” he told reporters after launching the Sarawak Region Community College Convocation Ceremony at the Dewan Kompleks Islam Baitumal here yesterday.

In addition, Abang Johari said, the study will also cover Bakun lake which has about 43,000 species of plants including wild orchids.

“When I went to Bakun, I felt that there must be a certain zoning where people are allowed to do angling.

“There is a rich biodiversity in Bakun which can become an attraction,” he explained.

According to him, they were also conducting a study on the possibility of building a subsidiary terminal in Tanjung Datu for cruise ships from Singapore, from where tourists will go over land to Kuching.

On a related matter, he hoped that community colleges could produce sufficient manpower for the eco-tourism sector to explain about bio-diversity to tourists.