Saturday, May 30
You are at:Home»News»Nation»RM30 million autism centre to be set up in Kuala Lumpur by 2015 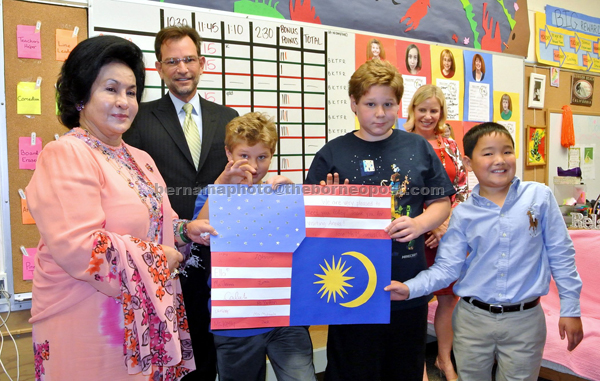 SPECIAL EDUCATION: Rosmah with a few students of the Anova Centre of Education in San Rafeal holding a Jalur Gemilang made out of cardboard. The school is meant for children and adults on the autism spectrum. At second left is Bailey. — Bernama photo

In 1985, the ratio of children with autism in Malaysia was one in 10,000 but the rising figure has become a cause for concern, while in countries like South Korea one child in 30 is autistic, she told reporters after a visit to the Anova Center for Education in San Rafael, here.

The Anova Center for Education was opened in 2008 and has 170 autistic students in three schools located in Concorde, Santa Rosa and San Rafael.

During the visit Rosmah shared her views on special education for students with autism.

Meanwhile, PacificSun.com, a United States news and information site reported Monday that Rosmah visited the Anova Center for Education in San Rafael to learn more about the school’s philosophy on education for children and adults with autism.

It reported that Rosmah was particularly interested in Anova Center’s focus on teaching “essential life skills for independence and creating the confidence required for success in school, home, and work.”

She also had a discussion with the school administrators on their education model with the hope that they could help Malaysia develop a similar programme, it said. — Bernama