Tuesday, May 18
You are at:Home»Sports»Football»Crocs relishes home advantage in second leg 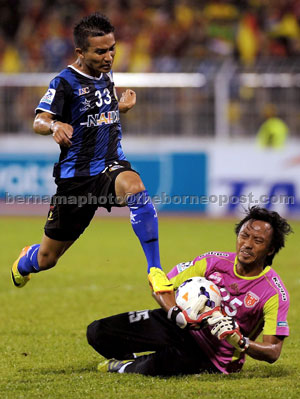 KUCHING: Sarawak head coach Robert Alberts thanks Crocs fans who travelled to Selangor to support their team at the Selayang stadium last Saturday in the Malaysia Cup quarter-final match against Sime Darby.

Speaking to The Borneo Post yesterday Alberts said he was satisfied with the goalless away draw as his team would be boosted by home support in the second leg to be played here this Saturday.

He said despite being away from home, Sarawak fans created a fantastic atmosphere at the Selayang stadium as they cheered their team.

With home advantage, the coach will opt for more attacking football in the second leg of the tie.

“We need to display more attacking football and understand how Sime Darby FC will approach the next game as well. Our performance in the last match was a little bit scrappy,” he said.

He was however happy that the Crocs did not concede any goal.

“ We must believe in ourselves that we can go all the way to win the Malaysia Cup,” he added.

Alberts also commented after the match last Saturday that the pitch condition at the Selayang Stadium was sub-standard.

“For teams resorting to long-balls, the pitch suits them but for a team like Sarawak, which preferred patient buildup, it was difficult.”

According to FIFA regulations, grass on the pitch be no more than 2.5cm tall and Alberts claimed that the picth at the Selayang Stadium about 5cm tall.