Tuesday, February 7
You are at:Home»News»Court»Ex-MP, relatives seek judicial review over nephew’s detention
For the freshest news, join The Borneo Post's Telegram Channel and The Borneo Post on Newswav. 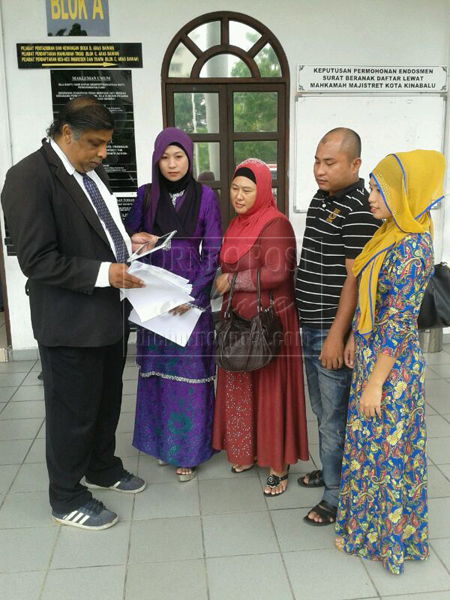 The applicants with their counsel Marcel (left) after filing the leave application for a judicial review at the High Court here yesterday.

KOTA KINABALU: Former Silam member of parliament Salleh Kalbi and his relatives filed an application for leave for judicial review at the High Court here yesterday over alleged unlawful 10-hour detention of the MP’s 30-year-old nephew by police.

The group, led by Fauziah Daud, 31, together with 16 others, filed their ex-parte application for leave for judicial review through their counsel, Marcel Jude Joseph.

Naming the OCPD for Lahad Datu police station, Mohammad Asyraf Mohd Aslam, and Mastura Dauda as the first, second and third respondents respectively, the applicants are seeking the following:

1. An order of certiorari that the First Information Report (FIR) be quashed for failure to comply with Sections 107, 108 and 108A of the Criminal Procedure Code (CPC) and that the said police report/FIR is false and it contains dubious details.

2. An order of certiorari to quash the arrest of the third applicant (the accused) during the appending trial.

3. An order of certiorari to quash the order of remand on September 27 this year on the grounds that the first respondent solicited the remand order based on false information that the third applicant had jumped bail and did not comply with the attendance at the police station as one of the conditions for granting bail.

4. A declaration that the remand of the third applicant for a further period of 10 hours after the expiry of the remand order is unlawful and contravenes Section 117 of the CPC.

5. A declaration that the action of the second respondent to refuse the release of the third applicant after the expiry of the remand order is an unlawful conduct.

6. A declaration that the detention of the third applicant for a period of 10 hours after the expiration of the remand order is unlawful.

8. A declaration that the third respondent made a false police report against the third applicant.

The group is also asking for damages and exemplary damages against the three respondents, costs, statutory interest and any other relief deemed fit by the court.

She said the trial of the third applicant’s case started on September 27 this year at about 10am, then at about 12.30pm, at the end of the proceedings, the court was informed by the prosecution that the third applicant would be arrested for another offence notwithstanding that he was on bail.

She also said that at the adjournment of the trial for lunch break, the officers of the first respondent rearrested the third applicant and held him under remand.

Fauziah added that the arrest was made based on a dubious police report /FIR.