Sunday, May 16
You are at:Home»Sports»Football»Ozil off the mark as Arsenal down Napoli 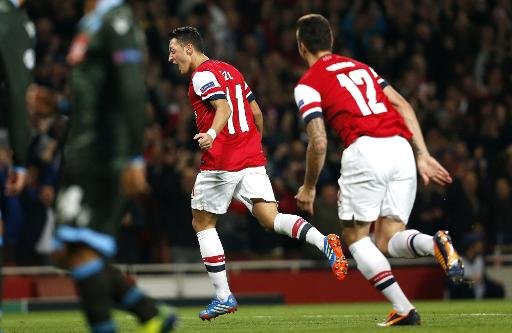 Mesut Ozil’s first goal for Arsenal inspired his side to an impressive 2-0 win over Napoli that maintained their 100 percent start in the Champions League on Tuesday.

Ozil, signed for a club record £42.5 million from Real Madrid on transfer deadline day, had promised to add more goals to his undoubted creative talent and the German midfielder was as good as his word with a superb strike to break his Arsenal duck early in the first half at the Emirates Stadium.

He turned provider soon after, setting up French striker Olivier Giroud for his sixth goal of the season to effectively kill off Napoli with just 15 minutes gone.

Arsene Wenger’s side have now taken six points from their first two Group F fixtures, while also surging to the top of the Premier League with five successive wins.

It is a remarkable transformation since a shock opening day defeat against Aston Villa prompted a furious reaction from the Emirates faithful.

Wenger had no reason to fear the boo-boys on another encouraging night for his emerging team and he was even able to leave England midfielder Jack Wilshere on the bench for the first 60 minutes.

Arsenal’s early-season form has prompted suggestions that a title challenge could be brewing in north London.

But Wenger might well be willing to sacrifice domestic success if he could guarantee winning the Champions League after this week describing his quest to land the one major trophy missing from his collection as an obsession.

While it is too early for any bold predictions of Arsenal glory in Europe, on this evidence the Gunners boss can at least expect a better showing in the competition than in recent years.

Wenger’s side are flying at present and their sky-high confidence was clear to see as they took the lead with a fabulous opening goal in the eighth minute.

Robert Pires has been working with Wenger’s players on the training ground this week, but even the legendary Arsenal ‘Invincibles’ team that featured the French winger would have been hard pressed to better a move of such exquisite style.

When Bacary Sagna clipped a high pass towards Giroud, the rapidly improving forward showed great strength and agility to flick the ball into Aaron Ramsey’s path.

Ramsey has been in the form of his life in recent weeks and the Wales midfielder demonstrated his eye for a killer pass as he picked out Ozil, who displayed immaculate technique with a fine side-footed strike past Jose Reina from just inside the penalty area.

Napoli had defeated last season’s Champions League runners-up Borussia Dortmund in their Group F opener and arrived at the Emirates unbeaten in Serie A under former Liverpool and Chelsea boss Rafael Benitez.

But they were no match for Arsenal in this mood and the hosts, stronger in the tackle and far more vibrant on the ball, doubled their lead in clinical fashion after some sloppy defending from the Italians in the 15th minute.

A poor clearance was intercepted by the alert Ramsey on the right flank and suddenly Napoli were exposed as Giroud fed Ozil, who raced into the area before slipping a low pass for Giroud to fire home from close-range.

But with the ponderous Goran Pandev leading the attack in place of the injured Gonzalo Higuain, Napoli lacked a cutting edge and Ozil and Ramsey, linking superbly in midfield, combined to keep them from establishing any momentum.

There was never any sense of Arsenal losing their lead in an anti-climatic second half and it was the hosts who went closest to scoring when Laurent Koscielny’s effort was well saved by Reina. -AFP