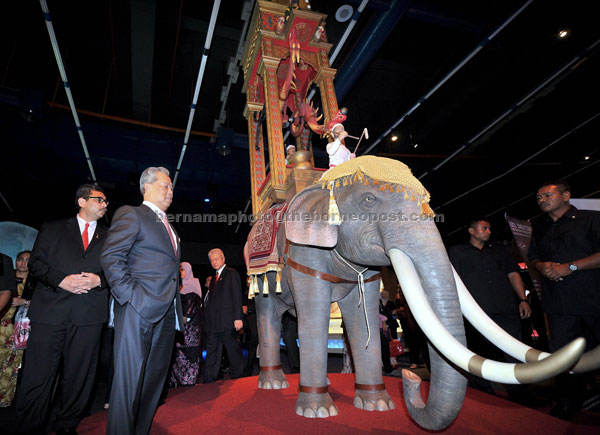 FASCINATING: Muhyiddin taking a closer look at an Al-Jazari Elephant Clock which is the main attraction during the exhibition. — Bernama photo

KUALA LUMPUR: The government is committed to build Malaysia into a developed high-income nation by 2020 and the shift requires strengthening the roles of science, technology and innovation (STI) to drive the country’s development, said Deputy Prime Minister Tan Sri Muhyiddin Yassin.

He said taking cognition of the importance of STI in driving economic growth, the government had and will implement various programmes and activities to instill the STI culture among the people.

“Among the critical aspects towards achieving these objectives is the presence of sufficient research scientists and engineers (RSEs).

Muhyiddin, who is also Education Minister and patron of the 1001 Inventions exhibition, said the decline in interest in science which  was  a  contemporary universal phenomena as the world moved towards modernisation was also felt in Malaysia.

Based on the report “Strategies To Achieve 60:40 Science/Technical:Arts Stream Ratio” by the Education Ministry in 2012, the falling trend of participation in science and technology started in 2006, he said.

According to him, in 2011, the percentage of science and technology stream students at secondary level was only 44.01 per cent.

“Among the cause is the negative perception among students on the subjects since young.

“Science and mathematics are still considered subjects difficult to master and score and could jeopardise the opportunity to further studies at university,” he said.

Muhyiddin said if modern inventions were traced back to their source such as engineering, green energy, mathematics, medicine and architecture, they actually began during the Islamic Civilisation.

“We are aware during the glory of Islamic Civilisation, many leading Muslim intellectuals and scholars were born and pioneered findings in such fields.

“As an example, many considered the Wright Brothers as the first to conquer the sky in 1903.

“But many are not aware that Abbas Ibnu Firnas had earlier done so in the 9th century with his flying wings made of silk and eagle feathers,” he said.

On the exhibition, which was specially brought from United Kingdom to the science centre and will end in February 2014, Muhyiddin said it would open minds and inspire students in STI.

The exhibition is open daily from 9am to 5pm and entry is RM20 per person for adults, RM15 for students and senior citizens while pre-school children (4-6 years) will be charged RM6. — Bernama