Friday, July 10
You are at:Home»Sports»MILO launches ‘Fuel for Champions’ in S’wak 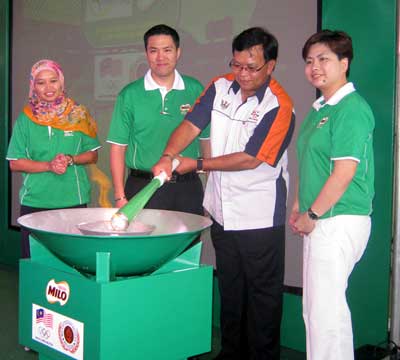 I GOT THE POWER: Affandi lighting up a cauldron to launch the ‘Fuel For Champions’ campaign at a shopping mall in Matang yesterday. Also seen are (from left) Sarawak State Sports Council (MSNS) officer Dedia Sarini Ahmad, Yoon and MILO Senior Brand Manager Ivy Tan.

KUCHING: MILO has signalled its support for the Malaysian 27th SEA Games contingent with the launch of its “Fuel For Champions” campaign here.

According to Nestle (Malaysia) Kuching Branch manager Andrew Yoon Peng Fai, the campaign is jointly organised with the Olympic Council of Malaysia (OCM).

“For the coming SEA Games, we are proud to announce that MILO will be the official beverage of the national contingent,” he said.

Calling on the nation to support the national contingent, he added that there was never a question why the national athletes deserve all the support as they exemplify the values of teamwork, solidarity, perseverance and courage.

The campaign was launched in Peninsular Malaysia last month.

It was then decided to promote the campaign further in Sarawak with a launch at a shopping mall here in Matang Jaya.

Meanwhile, Yoon also revealed that MILO would continue its role in contributing to the nation’s sports development through the development  of young local talents.