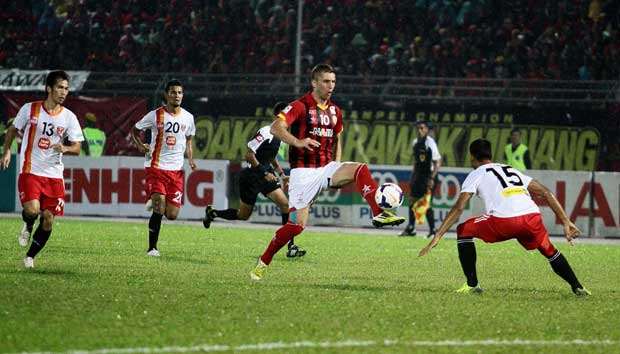 Muamer Salibasic registered his second hat-trick in the Malaysia Cup campaign so far as Sarawak defeated their foes 3-1.

The full capacity stadium was packed with relieved Sarawak supporters as the Crocs had to come from behind for qualification into the last four of the 2013 Malaysia Cup.

Sime Darby scored their goal early in the game as a miscommunication between the Sarawak players allowed Mohd Asrol Ibrahim to break through.

The Crocs desperately launched a series of attacks which saw four shots on target and three off in the first half.

The turning point of the match came in the 34th minute when Salibasic scored from the edge of Sime Darby’s penalty box to draw level 1-1.

Salibasic was again the man to turn the tide.

He put the Sime Darby defence to the sword as he took a beautifully-executed free kick in the 55th minute, from the almost the same spot that he scored the opener.

It was 2-1 and Sarawak was now on the driver’s seat.

But the Crocs refuse to rest on their laurels just yet and the siege on Sime Darby continued.

Then came Salibasic’s hat-trick. He capitalised on a mistake by the Sime Darby defenders in the 84th minute.

The man of the match slotted the ball which rebounded off the Sime Darby goalkeeper after a one-on-one situation.

And they were punished by the hungry Crocs who now march into the semi-finals to face Pahang.

In the other quarter-final match last night, defending champions Kelantan avenged their 4-2 first leg defeat to Johor DT with a crushing 6-1 home win to advance with a 8-5 aggregate.